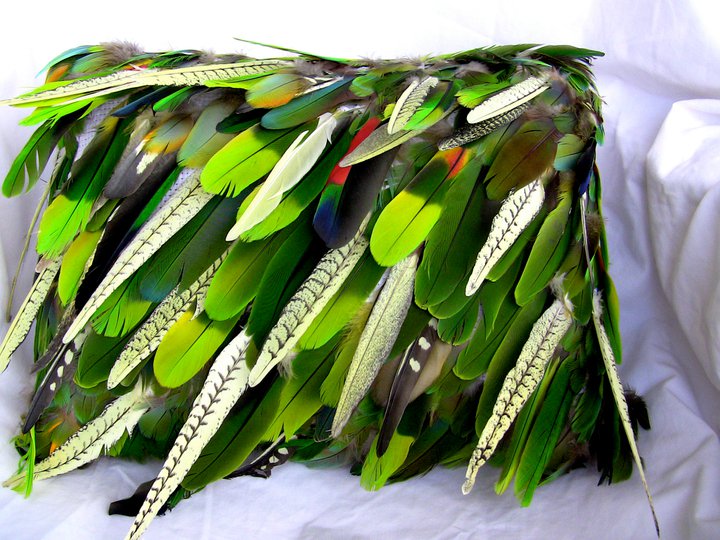 A decorative pillow I made for last year’s live auction.

I have feathers floating through the air of my home, my living room looks like the day after Black Friday at Filene’s Basement and my neck has a cramp in it.

This is how some of your feathers typically arrive. I have to sort this out by color and species.

The Houston Parrot Festival is coming up and I’ve begun making the pillows and scarves destined for auction to raise money for the NPRPF, which, if you don’t know, is an acronym for National Parrot Rescue and Preservation Foundation. That’s a mouthful! But they do great work in Houston.

Every year they throw a Festival. Every year, I say I don’t have the time or the money to attend.  Every year, I go.  I like it. For the most part, I enjoy it. And this year, I have some very cool people joining me for the first time, so it’s going to be a lot of fun.  But I like to contribute something to the auction and ever since the first year I attended wearing a quickly made costume-quality feather scarf for the parrot-attire themed “Party in Parrot-Dise,” I’ve been making items for the auction which is a big part of their fund raising. I’ve also sent scarves and pillows to Phoenix Landing. All in all, it’s been worth it; that dumb little costume scarf I made six or so years ago, has led to thousands of dollars being raised for parrot rescue and adoption:

The Scarf that launched a tiny fund-raising industry.

It’s not easy. If it was easy, you’d see these things all over the place. I thought that after the first year, when everyone saw that first scarf, that there would be feather items all over the place. No so. And I was very surprised. But then I thought about it: It took me a while to get the hang of it. And I’m still learning what looks good, what works and what is simply dreadful. It’s also very labor intensive. If you don’t have the patience, you are going to wish you never started the project. It’s frustrating, messy and you have to make it up as you go along because no two feathers are alike. It’s like fitting together a puzzle and you have no photograph to go by.

The other reason I think people don’t do stuff like this is because they can’t quite figure out how I do it, even after I’ve explained it.

And so I keep on with your generous donations of your feathers. Whether they arrive in an envelope, a baggie, a box, tin or shopping bag, it simply doesn’t matter. I generally use about 95 % of what is sent to me in one way or another. Unless the feather is completely mangled, it gets used. So keep saving those feathers because I can turn them into something that will raise money for something we can all believe in: Parrot Adoption. 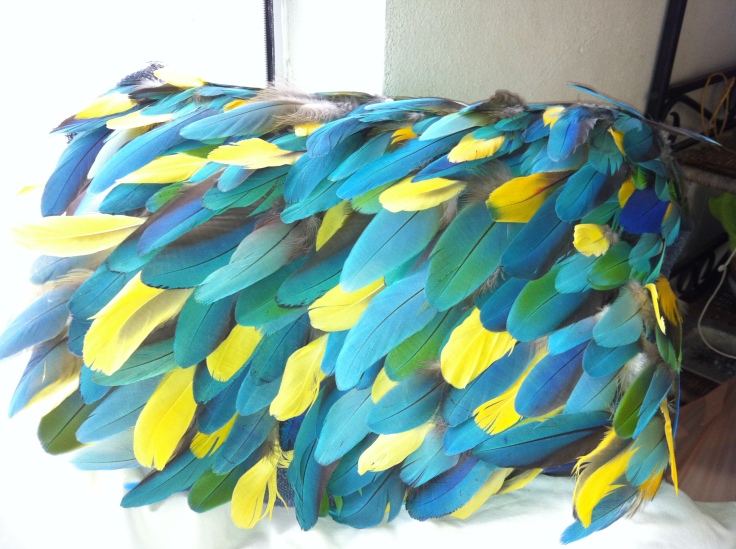