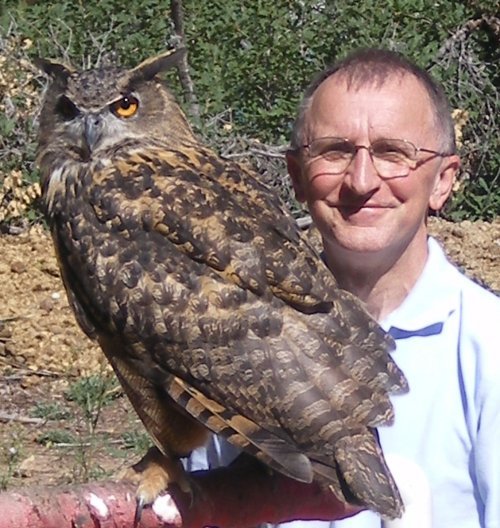 Sid Price has graciously granted my “Leading Questions” interview and did a bang-up job. His answers are remarkably short, concise and I suppose, like Sid, to the point. Sid Price has a company called “Avian Ambassadors.”

“Avian Ambassadors is a project utilizing birds of prey in entertaining free flight displays and demonstrations.

Sid Price founded Avian Ambassadors in early 2003. After working for many years at Wildlife West Nature Park (also in New Mexico) with mammals and birds in public presentations Avian Ambassadors was conceived to fulfill Sid’s dream of continuing to share his vast experience in the entertainment industry with his passion for birds and public education.”

Sid is the founder of Avian Ambassadors. He has more than fifteen years of experience working with wildlife in public presentations. He is a professional member of the following organizations: International Association of Avian Trainers and Educators, Animal Behavior Management Alliance, Association of Professional Wildlife Educators, New Mexico Wildlife Association, Raptor Research Foundation, and the World Parrot Trust.

Sid is President of the International Association of Avian Trainers and Educators and has also served on the board of the New Mexico Wildlife Association for several years. He is a charter member of the Animal Behavior Management Alliance.

Sid Price. Well, I don’t know Sid all that well. We’ve met and I highly respect his work in the field. I found him to be a rather quiet guy. The only extended time I’ve had with Sid was in a hotel van after the Houston Parrot Festival a couple of years ago. We were both going home and along with the two of us was a crew of Flight Attendants from my airline all headed to the airport.

I usually wear my uniform when I travel as its easier to negotiate the airport security lines and simply get around the airport when I have it on. So naturally, I was encased in navy blue for my trip home as were this working crew riding in the van with Sid and me. They were based elsewhere, on their way to work a flight and they began asking me questions about my base. Then we got on to contract negotiations and we were prattling on about things that of course, had absolutely nothing to do with birds.

I think Sid was a little out of his element because here was this bird person (me) that he had seen at the Festival all weekend and now I’m wearing a uniform and yakking away with these Stews about stuff using phrases like, “Eight behind the door” “U.M.,” “holding time” “being extended from a 14 to 16 to cover the trip,” “MIC’S,” “Pilots going Illegal,” “Bid sheet from hell,” “dropping dead at 1515” and “Purser Drafts.”

It all means something and if you know “Bully Buffett” on Facebook, his Mom could explain it all to you, but it would take forever. Suffice it to say, Sid was a little out of his element. I found it a bit amusing because he looked somewhat mystified at this foreign language we appeared to be using.

I guess he felt the way I felt when I first began studying applied behavior analysis and was trying to understand that language which consists of phrases like, “negative reinforcement,” “DRI,” “DRA,” “chaining a behavior,” “extinction,” and “learned helplessness.”

I kind of got a kick out of his responses to the interview questions because it took him about a half an hour to get them back to me. To give you perspective, relative to other submissions, Sid might just as well emailed them to me before I ever sent them. That’s how fast this was. I think his answers really reflect who Sid is as opposed to his work with birds. It was different than the interviews I’ve gotten back and I think that’s pretty nifty. Anyway, here are Sid’s answers to my “Leading Questions:”

2.  My biggest goal… is to be a better person

3.  I have tried… almost every kind of ethnic food, almost!

5.  Before I worked… at animal training I worked in the entertainment industry.

7. We try to… do everything the best we can.

9.  Sometimes… your gut tells you better advice than your mind.

Click on Sid and Kumbi for a link To Avian Ambassadors: