Do you ever look up in the middle of the day from cleaning a cage, scraping parrot poop off the floor or having to replace the bandage on your hand from the nip you got from your bird and wonder what in God’s name you’re exactly doing? I mean really…

What in the hell are we doing? And why? What drives us on? Why do we do it? Are we all complete Wackadoos?

A person that is crazy beyond belief and doesn’t seem to notice.

example: Sabrina is a wackadoo.

And I know this is a horse but I have a point. 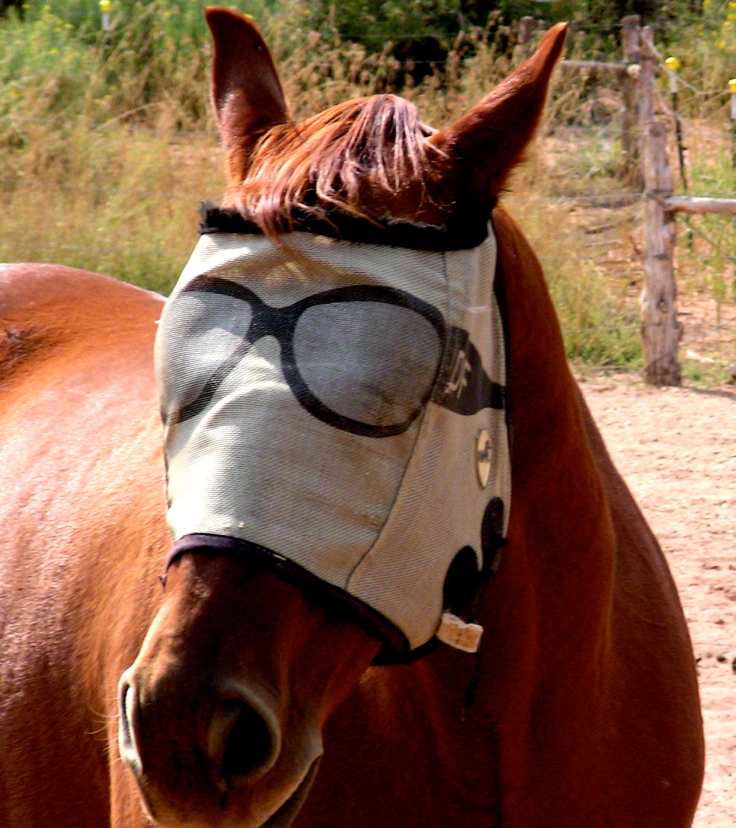 I recently wrote a post titled, “Can You Pass The Parrot Household Interview?” And the response was tremendous. The test contained some humorous, tongue-in-cheek questions with multiple choice answers. It was meant to get people to think about those exasperating moments with their birds when they get so damned mad they feel like they want to do something horrible. But they don’t.

People from everywhere seemed almost relieved that I had written questions in the test that reflected the possibility that one could get mad enough at their parrots for doing something so heinous that they had terrible thoughts. The phrase I used in the test was, “I’m ready to drag the little sucker behind a truck. But I don’t.”

People cheered, applauded and laughed. These are parrot people. A normal person would think they’d be upset. Not at all. Instead, “Parrot Nation” for a time, became the “Confessional For All Impure Thoughts” regarding their birds. It was as if I pulled this emotional plug, lanced a boil, or cracked some deep, emotional knuckle that made everyone feel better. There was a collective, “Ahhhhhhh…” once the laughing died down.

Later, I got emails from people who felt that I was watching them, or were amazed that I knew this about them. (Now do you get the horse photo connection?) Clearly, they thought they were the only ones that had these impure thoughts when they were so frustrated they were ready to throw in the grooming towel.

Many people who agreed with all of the obviously funny, yet “wrong” answers felt that they failed the “Test” until I let them know that by failing, they had actually passed the audition. I never asked the quiz-takers to be “right.” I asked them to be “honest.”

Lynne wrote to me: “OMG! That was hilarious and allowed me to be truthful to myself. Patricia, you’re like the bird slaves psychiatrist! I REALLY needed this! Thank you!”

I’m not so sure about the psychiatrist part, but I’m all for making people feel better about their current situation. I’ve always maintained that this is not an easy life with birds. This is a life that we chose or one that chose us. It doesn’t matter. This life may not be as easy as apple pie, but it’s what we do, and what we’re pretty damned good at. Not everyone can say this.

And as far as I’m concerned, handling the state of “getting pissed off a lot” says a mouthful regarding our ability to handle life in general. Let me put it it this way: If you can handle a bunch of parrots day after day, working on an airplane or anywhere else that involves working with human behavior for that matter is pretty much a walk in the park. However, I have to hand it to my flock: My birds are cleaner than most people on an airplane. Somehow, working with parrots makes you better with people. You become more patient. At least that’s my opinion.

All I know is that I touched a nerve here in our “Wackadoo Nation.”  Until now, I’ve found that people were unwilling to admit there were times when they got really angry about the behavior of their birds. I mean really, really upset.

You just never hear a group of Parrot People sitting around talking about how they got so upset that they had to leave the house and take a walk  just to calm down. It’s hard to admit. Nobody wants to give other people the impression that their birds are occasionally a pain in the ass. I just want people to know that they aren’t the only ones that get agitated.

Vet Tech and professional parrot groomer Shari Mirojnick uses an expression I think is hilarious: “Birdie Jesus.” I think we would all like to think of ourselves as a “Birdie Jesus,” or a “Birdie St. Francis.” Sure as hell beats being a “Birdie Mommie Dearest.”

Somehow, talking about the frustration we occasionally have with our birds made it easier for the “PN” readers to accept this agitation and work through it,

I get it. I totally understand. And that’s why I wrote the post. There are times when I get so upset I just want to cry. And then, like everyone else, I get over it. I move on.

In my bird room,  there is complete peace at the moment. My “bird room” also happens to be my living room, dining room and office. I gave up writing in my office years ago. The office is now simply a guest room and a room that holds my “interesting stuff” like my antique brass blowtorch, an old fountain pen and and a vintage microscope. My books and DVDs are in there too.

Parker was such a nag about my working in there, he would swoop into my office and land on the day bed.

He’s not flighted, so I have no idea how he pulled this off. I also gave up the dining room for the birds cages, or “rooms” as I call them. They’ve not only taken over my life, they’ve taken over my home. Just another one of my “Wackadoo” moves…

Right now, Pepper and Nyla are on the front porch catching some sun and Parker is busily preening on a stand five feet from me. It’s silent. Peaceful. I’m content and so are my birds. It is moments like these that make me want to swoon. Despite the fact that I have three wild animals in the vicinity, for the moment all is well. It won’t last.

I know damn well it won’t last. And I don’t care. Because in the end, it’s worth it. I feel just like the people who hand-carved the stone in the photo at the top of this post for their cat, “Hopi.” When he passed, this was the memorial for the stray cat that walked into their lives, peed in their shoes and crawled into their hearts. Cat, dog, bird, bunny, it doesn’t matter. What matters is that they matter to us. And we’re better for having been here with them.