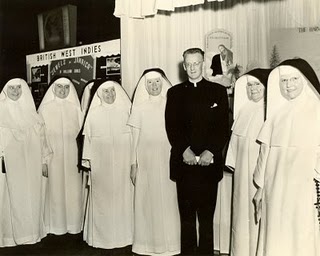 I remember “Parent-Teacher” Conferences. My parents would dutifully dress up and go to my school to meet with my teacher of that year. Back then, it was a suit for my Father and a nice poly-blend shift for my Mother with panty hose, heels and some good costume jewelry which was high fashion at the time and made women rattle like maracas when they moved.

My Dad wore a suit to work every day so he just left it on.  Given my parents’ choice of schools for me, they were usually greeted by one Springfield Dominican Nun or another wearing a big veil that made her look like the Picasso sculpture in Chicago with a stern expression on her face.

Both my parents were fairly charming when they wanted to be, and while my Mother was never fazed by the nuns, I don’t think my Dad was ever too thrilled about these little “Get-Togethers.” As far as he was concerned, they didn’t have a bar set up and he enjoyed a drink after work, so this little exercise wasn’t thrilling him. For one thing, he wasn’t Catholic and I don’t think he quite knew how to behave with a woman wearing head to toe black and white robes and carrying a rosary with a crucifix the size of a viking dagger hanging from her belt. I had to agree with him on that one. I never did get the whole “Nun” thing. And their shoes were Godawful.

They would then come home, get back into their casual clothes, pour a drink, sit me down, sigh and give me the skinny on what was said. It usually involved words like “very bright,” and “precocious.” I asked what that meant and my Dad said, “That means you have a big mouth, kid.”

All of these words were bandied about and yet Sister Mary Celestine felt that I wasn’t working to the level I could be working. Well, all righty then. It turns out that just because I made all As and Bs, didn’t mean I could coast on my keester. Nope. They expected more. To this day, I’m not real sure what they wanted but I ended up with yet another task: proctoring tests to fourth graders, (I was in third) due to my “Big Mouth.” I guess they felt this would somehow “challenge” me. (It didn’t, I mean I was just reading the test, not teaching the stuff but consequently, fourth grade was a breeze.)

Now, I was a pretty busy kid. My parents hated kids being in sports so any involvement in that and cheerleading was out. But their assumption was that if I was busy ramming around, I wouldn’t have time to get in trouble. I played trumpet in the band, (A radical choice at the time as it wasn’t considered a “girl’s instrument. As far as I was concerned, they could kiss my harmon mute.)

I took ballet three days a week from one of the best teachers in the area. Lisa Boehm, a former professional dancer at the Berlin Opera House, was a great ballet instructor with a strong German accent. Although the way she yelled, you’d think the Germans were  invading Poland all over again.)

I also read a lot, I was a Girl Scout and my Mom had me doing housework like an indentured servant. This included washing dishes, mowing the lawn, raking leaves or shoveling snow depending on the season, ironing, weeding and doing laundry. There was more but I’m getting tired just thinking about it.

Consequently, I was a tad busy. But woe betide me if the grades weren’t up. And it’s not as if my parents were ever really upset about my grades. They couldn’t be. But there were no “levels” of learning in my school. I knew I wasn’t gifted in the traditional sense. But I had such a handle on the English language and learned to read at such an advanced level so early, it translated to other courses. Essentially, if I could read it, I could learn it. I’ve always had a thing for words. (Please refer back to what my Dad said to me “Apres Conference.”)

Which brings me to my point. You may think I’m nuts, but I occasionally sit down with one of my Greys after the others have gone to bed and we have a “Talk.” I call these informal get-togethers  my “Parrot-Teacher Conferences.” They usually go like this:

“Parker honey? How are we doing.”

Silence, except for the popping of buttons on my shirt. *Pop* *Pop*

“Parker, sweetie, the reason I ask is that you seem so distant lately. You’ve been spending all of your time flying off of your stand and wandering into the bathroom.”

*Big rustling of feathers. massive preening and a shake*

“Ahh-Choo! Parker sweetie, you know I care about you very much. (Sniff, sniff.)  And I think in the overall we’re doing pretty well.”

“Well, you know how I feel. I adore you sweetie and I know I’ve been doing an awful lot of writing lately and you do get to…Honey, stop chewing on my shirt collar and listen.”

” I just want to thank you for being such a good boy and eating all of your dinner and not popping the cover on the thermostat as often as you used to. You know I love these talks just as much as you do.”

*Blink. Blink. Soft whistling of the theme from “The Good, The Bad and the Ugly.”

“Good Boy! You want an almond?”

So much for “Parrot-Teacher Conferences.”