This is why Christina Decided To Throw a Chop Party!

Christina Giordano of Angels of Flight decided to take my suggestion of throwing a “Chop Party.” Her birds like Chop so much, she decided to get together with her friends with birds and make a huge batch to share with them.  When sending out invitations and announcements via email and Face Book, she referred to it as “…kinda like a Mary Kay Party, only with vegetables.”  I thought this was hilarious!

Before the party she emailed me the list of ingredients that were being utilized into the chop, and it was extensive. This is what she used:

It’s a very well-rounded list of ingredients and seems like quite a balanced selection of items. There is enough seed to keep them interested, yet it’s loaded with “good for them” green  and orange vegetables.

When the party started, they divided up the work into stations. Christina took some video:

This is a shot of some purple cabbage being added to other chopped vegetables: 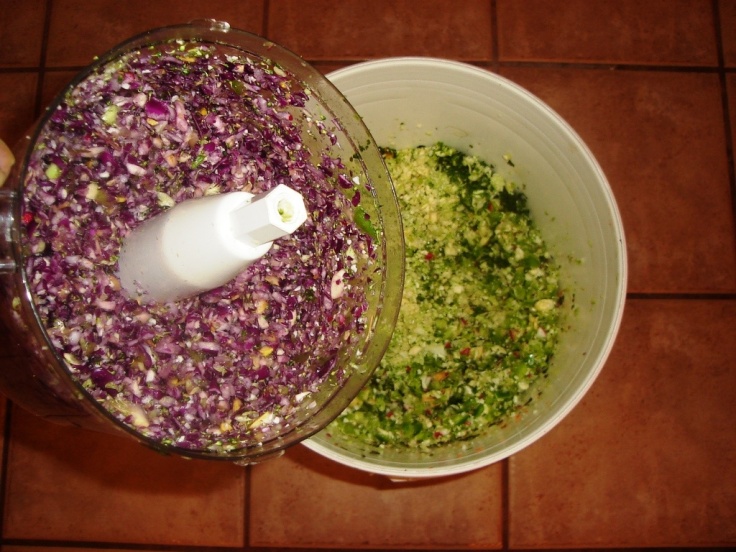 Once they got the vegetables chopped, they were challenged with finding a container big enough to hold it all in order to mix it. Tamaran Scarborough of Georgia purchased a small Kiddy Pool to in which to mix her Chop. Christina had never made such a huge batch before, and as we were discussing it over the phone, it hit me. I told her to simply clean and disinfect the bathtub and use that to mix it. Then load the mixed chop back into the five gallon buckets, take it to the kitchen and begin packaging it there:

This is what it looked like before Christina got her hands on it: 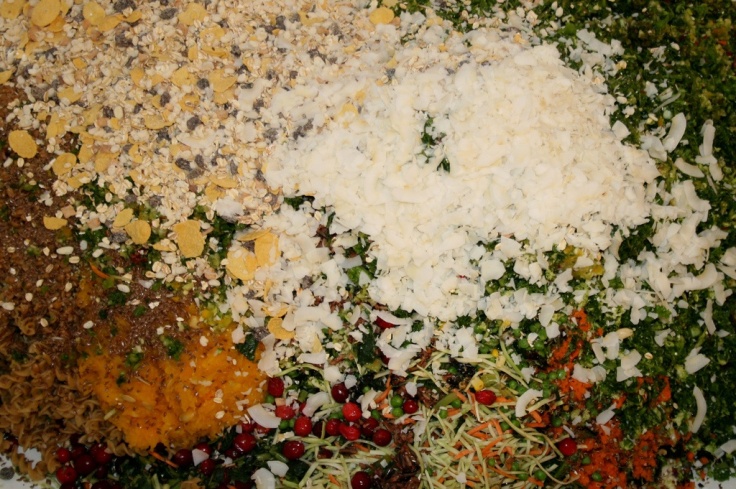 They did just that and it worked beautifully. And there was a never-thought-of-before bonus: As as she was mixing it, the excess moisture from the Chop filtered out and down the tub drain. Bingo! It was perfect! Here is a video of Christina mixing the Chop in the bathtub. My friend Missi took the video:

At the end of the day, they had 1800 meals for 11 birds. While this was going on, I was on the phone with them sporadically, asking how it was going. As they were working, they were posting the photos and video on Facebook so everyone could see the progress. People were posting questions and I was fielding the questions and doing a “Play-by-play” if you will, on FB while they were assembling the Chop and putting up the shots and the video. It was a ton of fun for everyone and the Chop they made was gorgeous. Here they are packing the “Chop.” Yes, I am fully aware of what it “looks” like they packing, but I assure you it is “Chop!”:

Patrick and Darrin painstakingly roll the bags of chop, squeezing the air out of the bag before sealing.

I hope this helps you understand “Chop” as a method of feeding your birds. It’s intense work for a short period of time, but then you are done for as long as the chop lasts. and it is incredibly good for your birds. In the end, all Christina had to do was rinse out the tub and wash her hands:

And yes, she washed her hands before mixing it!

I’m incredibly proud of Christina, Missi, Patrick and Darrin for taking the bull by the horns and throwing the world’s first “Chop Party.”  They did a fabulous job and from what I was able to tell by phone and by the photos and videos, they had a hell of a time. Naturally, it was a lot of work, but they are off the hook on making “Chop” for a few months. And in the end, it’s always worth it. Their birds just love the stuff. And if you make enough of it, after you have it packed, you can sit back, admire your mountain of “Chop” and bask in the knowledge that not only are you saving time in your day-to-day life, you are feeding your birds an incredibly healthy component of a well-rounded and nutritious diet.

And now, a Celebration for a great time, good Parrot Food and Congratulations on the world’s first “Chop Party!! Well done!

(Sorry, but i couldn’t embed the video…but you can still click on it and watch it on You Tube!)