Stuff Bird People Like #1: Getting Their Photo Taken With Birds

There is a blog out in cyberspace called “Stuff White People Like.” No need to be uncomfortable, it is indeed a real blog right here on WordPress, but  I don’t write the thing.

However, being a Caucasian from the Midwest, there are, umm, certain items that we supposedly like; such as the TV series, “Mad Men,” Asian fusion food, expensive sandwiches, dogs, sushi, pretending to enjoy classical music, kitchen gadgets and finally, Apple Products. And there are more. So many in fact, that they got a book deal.

Oh, about the Apple Products thing. I have to say they have me pegged on that one. The “Stuff White People Like  Blog” (SWPL) states,

“Plain and simple, white people don’t just like Apple, they love and need Apple to operate.”

Okay, so I’ve been reduced to a cultural stereotype. No matter. I thought this was a fun, interesting idea. 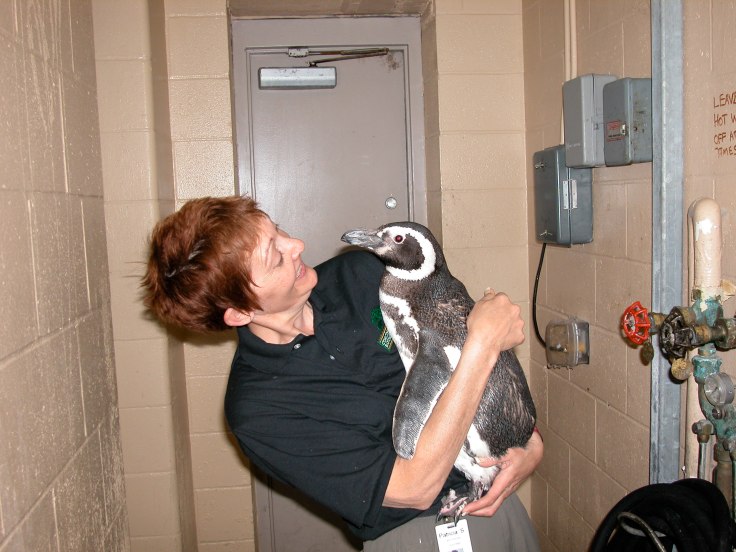 #1 Getting their photo taken with an uncommon species of bird.

Now we’re all this way, aren’t we? Well, maybe not everyone but I’m absolutely nuts about that sort of thing. But then, I have a tendency to take it a bit further and don’t want just the photograph, I need to actually work with them, feed them, clean up after them, do research about them, photograph them and write about them until I am safely able to state, “Penguins? Well, I can tell you from experience that you would not want to get crapped on by a penguin. Want to see my penguin bite scar?” I call this “volunteering,” which in reality is really hard work. I also call this “writing,” and “learning.” But what it really comes down to is getting to hold a penguin. Yes, I uproot my life for weeks at a time so I get to do cheesy stuff like hold a penguin and walk a pig. (See “Piggy Paradise” if you don’t know what I’m talking about here.)

But I think we’re all guilty of that. So much so that I have seen bird handlers go to heavily populated areas such as a beach or a park with their exotic birds and charge people to get their photos taken with their birds.

May I point out that these people never have five or six Budgies or Lovebirds you can pose with. Personally, I think that would be hilarious! “Want to pose with my parrotlets?” (And yes, the exclamation point is mine.)

No, it’s always the big guys: The Blue and Golds, Hyacinths, Green Wings and Scarlets; photos of you with the giants so you can impress your friends with your daring feat of having a macaw perch on your shoulder while you smile as though you just won the lottery.

I think it makes the person whose photo was taken feel  different from the rest of the average bird owners. Maybe we feel that the “Average Joe Bird Owner” doesn’t know the joys of having handled such an exotic species and it sets us apart from the average bird owner who hasn’t had the opportunity to experience such a moment. (At least in their mind.)

But then, you’ll run into someone who will see the photograph and say, “Big deal! I have 3 of them in my living room.” which then blows your entire feeling of having experienced this “unique” moment to smithereens.

All I know is that I really like being introduced to different species of animals and getting my photo taken with them. And that’s why this is #1 on the “Stuff Bird People Like” list.

Can someone tell me why this is so? Because I just can’t figure it out, even though I am guilty of the same proclivity.

4 thoughts on “Stuff Bird People Like #1: Getting Their Photo Taken With Birds”