And the Band Played On…

About a year ago, I did a presentation at the Rocky Mountain Society of Aviculture about getting the word out about your club, rescue, agenda, your work, your product; whatever it was that you were promoting. It was a pretty solid presentation about “branding” your organization and lifting your profile. And unlike me, it was funny.  In one of the sections of the presentation, I made a reference to Susan Friedman and her work with educating the masses about positive reinforcement behavior training. I asked how many people knew her six years before. No hands. I asked how many people knew her now. TONS of hands! Then I asked the same question about myself: How many people knew me now? Some hands. How many knew me three years ago? One hand. What? Hey! There weren’t supposed to be any hands! I laughed and we all got a chuckle that this one person happened to read the first article I’d ever written for Bird Talk. 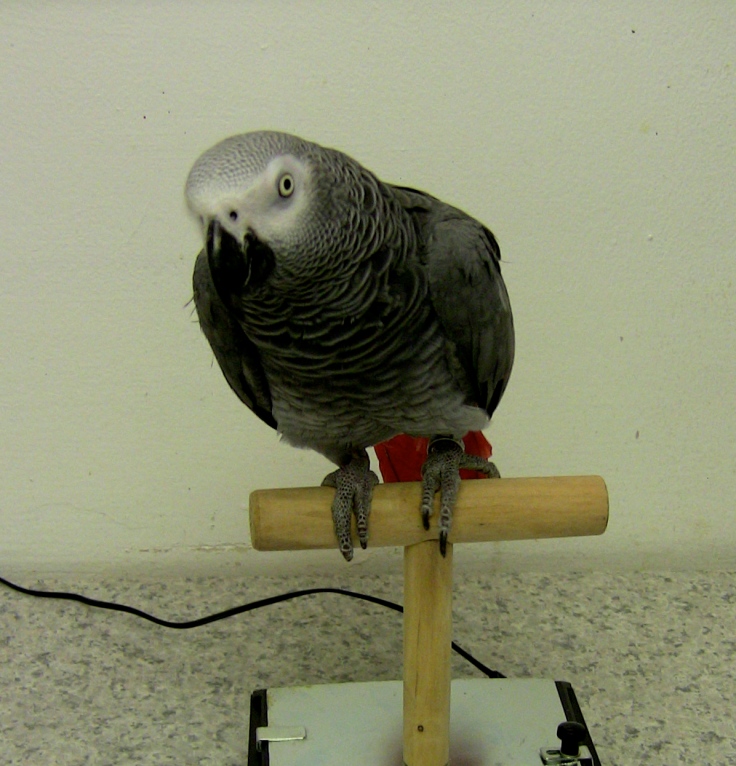 I have a point here, bear with me. The point is, if you know me, if you’ve read my work and if you even have an inkling about me and what I believe in, you know that I support adoption and rescue. I regularly glue my fingers and pant legs together making items from molted feathers to be auctioned off for adoption and rescue foundations. I support Phoenix Landing, the NPRPF, and scads of others who are attempting to do the right thing. Well, apparently that little fact has escaped one website completely. Well, maybe it didn’t, but they didn’t care.

Here’s what happened: I put together a pretty nifty little video for my friends at the Parrot Garden at Best Friends Animal Sanctuary, the largest animal sanctuary and adoption foundation in the country. Thought I’d show my appreciation for their kindness, and for letting me ask them incessant questions, stick my video camera in their faces every five minutes and have them repeat what they just said so I could show the world the incredible work they’re doing.

One of the BF staff members posted the link to the video on a rather hard core adoption-supportive forum. It was taken down due to the fact that I had a link to a woman who has amazingly good information on her website. She happens to be a breeder. Doesn’t matter that she is brilliant. Doesn’t matter that she is very helpful to all who contact her. She’s a breeder. Apparently she is evil.  And because that link was on my website, I must be censored.

Well, gee whiz! Does that mean they don’t give their birds commercial pellets because breeders use the same product? Or don’t buy toys from certain bird toy companies because they sell their toys to stores who sell birds? How far does this go? Where does it stop? How much disassociation from breeders do you need to have before you are considered “pure?” 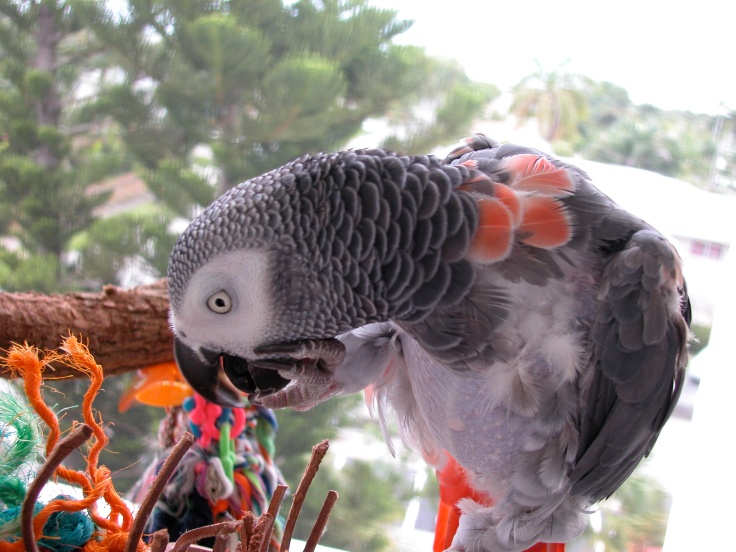 For example, I’m not the kind of person that will hang out with Charles Manson just because we both like to write. I won’t be spending much time with that kind of person because that’s just crazy.

But conversely,  I’m not going to be hanging around much with Handmaids of the Precious Blood either. (It’s a cloistered convent) I’m sure they’re a real nice group of gals, but we don’t have a lot in common. Doesn’t mean they’re bad. How bad can a convent of nuns who pray all day really be?

It just means that we look at the world differently, that’s all.  I’m not going to try and get them to understand why I promote rescuing birds when they’re busy trying to save souls by praying.  Does that make me bad? No, at least I don’t think so.

Does that make them bad, when I think they would serve the world better by coming out of their cloistered convent and help the world with their hands rather than their prayers? Again, no. It’s just a different point of view. It’s been said that the Rescues are overflowing due to breeders. While I’m not a fan of breeding, I don’t think that’s the root of the problem.

I think the problem is lack of education.

Let me repeat that:

I think the problem is lack of education.

She said, “It’s all education.”

I take no money from writing this blog. I don’t take any money because I don’t advertise. That’s not what this blog is about. This blog is about education and information. Let me repeat that:

This blog is about education and information.

It’s not about supporting breeders or condemning breeders. It’s about getting information out. Frank Abignale was the focus of the film “Catch Me If You Can.” According to Wikipedia:

Frank William Abagnale, Jr. (born April 27, 1948) is an American security consultant best known for his history as a former confidence trickster, cheque forger, skilled impostor, and escape artist. He became notorious in the 1960s for successfully passing US$2.5 million worth of meticulously forged checks across 26 countries over the course of five years, beginning when he was 16 years old.

It goes on to say this:

He is currently a consultant and lecturer at the academy and field offices for the Federal Bureau of Investigation. He also runs Abagnale & Associates, a financial fraud consultancy company.

Sounds to me like the FBI condemned what he did, but liked his information enough to hire him and they pay this convicted criminal to help them solve crimes. Does that make the FBI bad?

Best Friends Animal Sanctuary had a great series about them called “Dogtown.” It ran for four years on National Geographic. It brought their profile up tremendously while simultaneously raising their volunteer rate and donations. It went up so much so due to that show, they were overwhelmed with people who wanted to help.

Problem is, Nat Geo also has “The Dog Whisperer” on the same channel. Caesar Milan’s training methods aren’t all positive reinforcement. His methods are criticized by many for his use of flooding techniques, etc. Best Friends doesn’t use those techniques. They don’t condone those techniques from what I’ve gathered. 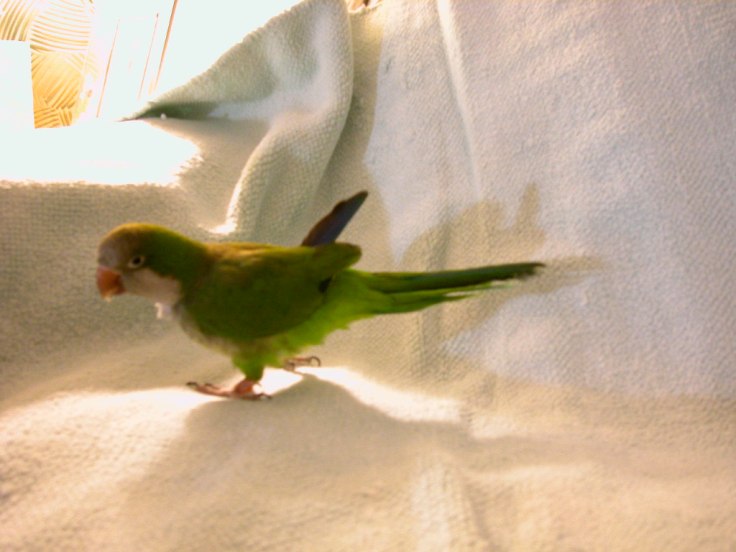 Does that mean Best Friends shouldn’t have had that show on Nat Geo because they also run “The Dog Whisperer?” Isn’t that throwing the baby out with the bath water? Well! Let’s censure Best Friends because National Geographic had another show running that doesn’t use pure positive reinforcement training! Now, how does this make sense? It doesn’t. That’s just silly.

National Geographic also sells leather footwear on their website. Best Friends has a ton of vegetarians working for them. Their lunch dining room is vegetarian. Again, should Best Friends censure Nat Geo because of this?  A lot more good came out of “Dogtown” than bad.

I think we need to choose our battles. And keep our eye on the ball. So all of this fuss because I had a link to a woman who is very knowledgeable about birds who happens to be a breeder.  You know, it just isn’t that important having that link. Never was. I really didn’t even think about it at all until this dust was kicked up. I thought I was doing the right thing by getting good information out. Apparently I was wrong. Now, I have to be careful of who’s information it is and where it comes from. Even if it might help someone.

24 thoughts on “And the Band Played On…”