Cleaning Chronicles #2: Parrots in the House and Keeping it Clean…Good Luck 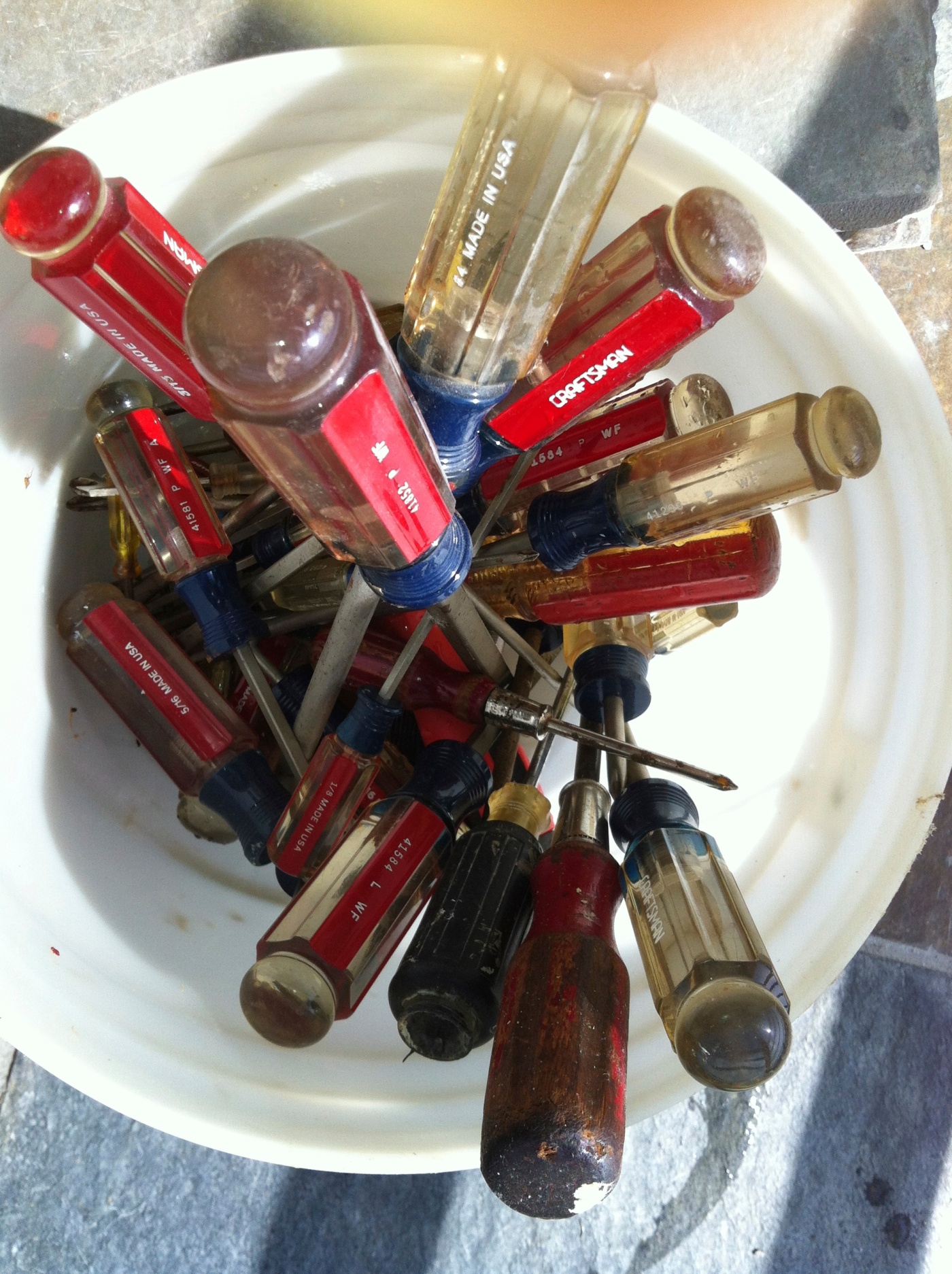 How many screwdrivers is enough?

Keeping a house clean and clutter-free when you care for parrots presents some tricky challenges. You’ve got some real piggies that love to toss crap all over the place. The dust, dander and feathers they cast off end up in the strangest places and if anything has a spot of grease on it in the kitchen, it immediately turns into a dust magnet.

You can’t put your oven on “Clean” mode when the parrots are in the house, so they have to be gone when you do this.   This takes planning . You can’t use any strong smelling cleaners that emit fumes. And unless you have a drain installed in the middle of the area where your birds live, you’re carrying buckets because hosing the joint down simply isn’t an option.

As you have probably read, I had one hell of a year and my “Cleaning and De-Cluttering” rampage I had planned for September got set back until now due to some unfortunate issues…a concussion followed by an insane flying schedule, followed by a viral stomach bug.

How to get rid of “Stuff.” Simply pick it up and remove it from your premises.

So here I am in January, trying to right the wrongs of dust, clutter and lack of organization. Something had to go, and it wasn’t my flock. So I began a “Spring Fling” early in the year as I live in Florida. It’s crispy-chilly outside and a nice time to clean and organize. I want to wash all of the walls , (two are done) de-clutter and clean the cabinets inside and out, reorganize  the kitchen, the utility room, (completed) clean the ceiling fan, deep clean the bathrooms, and tackle my office and the bedroom.

Those last two are going to be the worst of it as my “stuff” is in there. As we all know, our “stuff” is the worst and the hardest stuff to part with. It could be anything. In my case it is inexplicable stuff: A cylinder from a DC3 aircraft, books, and certain pieces of clothing I don’t wear anymore but I will have a hard time getting rid of them. I also have a lot of cast iron cookware. I don’t need all of the pieces but I happen to simply love old cast iron.

Lucky for me, when it comes to clearing out my bedroom, I have a friend coming over. She is clever, objective and I know she’ll be the perfect person to help me with the decision-making.

I do have another issue with clothing: For some odd reason, people seem to enjoy giving it to me. It’s usually something they no longer want or need or it doesn’t fit them anymore. I’m a little on the thin side. And so, as some of my friends “change shape” or grow a little thicker in the waist, they give me the things that no longer fit. I haven’t bought a new pair of jeans in years.

This is going to be difficult for me as I was raised with the “Great Depression” mentality. Both of my parents went through the Depression and if something could be reused or repurposed, it was.  You didn’t waste and you didn’t throw things out willy-nilly. I wore hand-me-downs from a neighbor’s kid.

Let me explain a thing or two here. This is not a scene from the show “Hoarders.” I just want more elbow-room and I want to live more simply. Too much “stuff” is just too much “stuff” and if I don’t wear it anymore or no longer use it, I want to get rid of it. If it has no purpose, I want it out of my life.

Let me explain it this way: I have 2 sharpening stones for my knives. How did I get two? Well, I had one and someone gave me another. Will I ever wear out the first one? Of course not. Then why in God’s name would I keep both? The second one is in the donate box. I don’t need two. Period. 2 of something like that is excessive.

Another example:  I have 2 sets of noise-cancelling headsets.

I only need one pair. I’m donating the JVC headsets.

Well, I think you’re getting the idea on how to sort “stuff.” It’s difficult. But it can be done. Stay tuned for more stuff going out the door.