Spock. You were loved…

The after-effects of an emotional time tends to wear you out. Best Friends sometimes has that effect on the people who volunteer. While confronting the work that they do, you tend to examine yourself. Here are people who do very important work day after day. You are only there for a short while taking it all in.

And it takes its toll. In many cases, you don’t realize the emotional toll until you return. In some cases, it hits you in the face while you are still in Kanab. Sometimes, you get it both ways.

Beyond what you want to see of Best Friends: the bunny hugging, the Bambi-ology, the moments of, Oh-My God-isn’t-that-the-cutest-puppy! comes the work. The day-to-day grind of cleaning up poop. Washing floors. Cleaning enclosures.

You see the dogs who have been damaged emotionally and physically and you just want to sit down and cry. But you don’t. There is too much work to do. Or you cry and keep on working.

Bill over at DogTown told me that you can’t look at that side of it. You have to look at what they have now. You look at how they are treated now. Because if you thought about their past too much, it would be pretty depressing. Of course this was after I had just visited Lucas, a Vicktory Dog. Naturally, I was a little upset, despite Lucas’s gentle demeanor and playful spirit. To the professional, this is all part of the job.

Another part of the job  is losing the occasional animal. That part is the hardest. That’s the one that nails you.

It happened at the Parrot Garden while I was there. Twice.

Now let me be perfectly clear here: The Parrot Garden hasn’t lost two birds in the last four years. Unfortunately, they lost two in the same week last month, and it rocked them. It was a tough week and the caregivers were clearly upset.

Spock was a thirty-plus year-old Quaker who had been on an all-seed diet most of his life. He passed while Bonny and Kelly were there and they were both devastated. It was especially tough on Bonnie because it was she who found Spock early in the morning.

It’s always hard to lose a bird when you love birds so much. Any bird, it doesn’t matter. 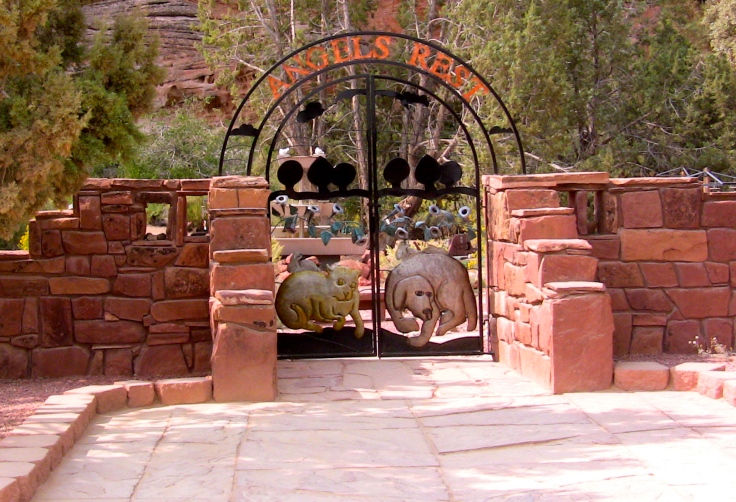 The gates at Angels Rest

And so, while we were there, we attended Spock’s placement at Angels Nest, the resting place for birds at Angels Rest. Angels Nest is found under a tree and is an egg shaped plot. The path passing in front of Angels Nest is deliberately wing-shaped. It is a beautiful spot and that is where Spock is tucked in.  It was a simple yet moving ceremony. Best Friends believes these animals that pass on deserve our respect; the same respect one would give to a human. And so it was on that sunny day when Spock was tucked in. 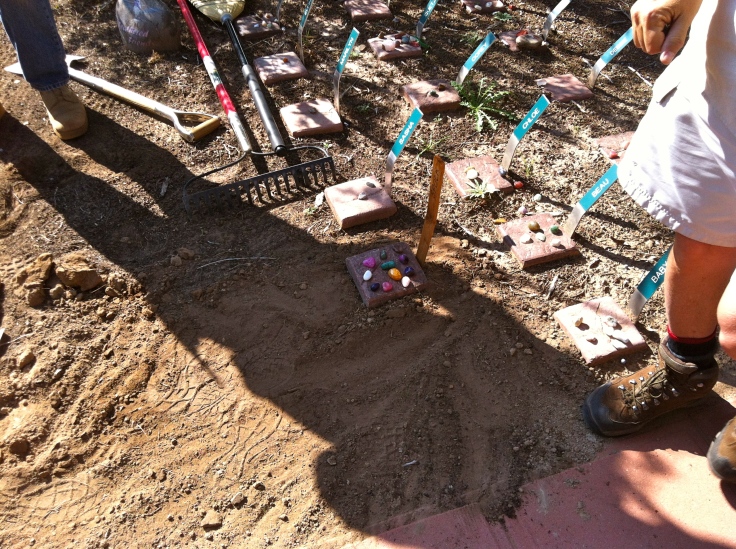 The rocks on Spock’s paver are memory stones from those who attended the placement as a sign of respect and remembrance. It was not an easy ceremony. Jacque felt terrible because there wasn’t much that could be done due to the damage already in place when he arrived. I am not sure, but I suspect it was the all-seed diet that played a huge part in Spock’s passing.

In the midst of all of this, Jacque sent me a photograph from the Brisbane Bird Vet Facebook Page. This photograph will indeed chill you:

In the photograph above, you see two blood samples taken from two different birds. On the right, is a vial of blood from a healthy normal bird. On the left is, and I quote Brisbane Bird Vet, “…blood sample from an 18 year old Major Mitchell Cockatoo who had hepatic lipidosis (fatty liver syndrome), reproductive disease and pancreatitis. This was caused by a seed-based diet and her entering a reproductive cycle.”

What you see in the sample on the left is the white fat spun to the top found in the blood. Chills you to the bone doesn’t it? And as my friend, Katrina Webster commented on the photo, “Umm, Chop anyone?”

Unfortunately, Later in the week, Stacey was doing morning feeding and cleaning and found Gracie, a beautiful Cockatoo on the floor. I heard Stacey scream, “Patricia!” She was crying uncontrollably and clearly heartbroken. And all I could do was alert Jacque, grab Stacey and hold onto to her.

When you work with these birds day after day, you become attached to them. You know their likes, their habits and their little quirks. You get to know them.

Gracie was clearly one of the more easy-going and lovely cockatoos and one of Kevin Johnson’s favorites. Kevin is Jacque’s husband and works as a Caregiver at the Parrot Garden. Gracie came in as a rescue with quite a few health issues from Avian Vet, Dr. Fern Van Sant. Apparently Dr. Van Sant found this cockatoo in a bad situation, got her out of it and settled her in with the Parrot Garden after doing what she could to fix Gracie up. What was Gracie’s life like before Dr. Fern rescued her? Everyone is in the dark about her prior history.

Gracie had been seeing the Vets at Best Friends on a regular basis. They were helping her with a prolapse but this is not what caused her passing.

Unfortunately, I suspect again that a long history of an all-seed diet was the culprit. Wendy Hatchel did a necropsy on Gracie and told me her liver looked like coffee grounds. Obviously, not a good thing. 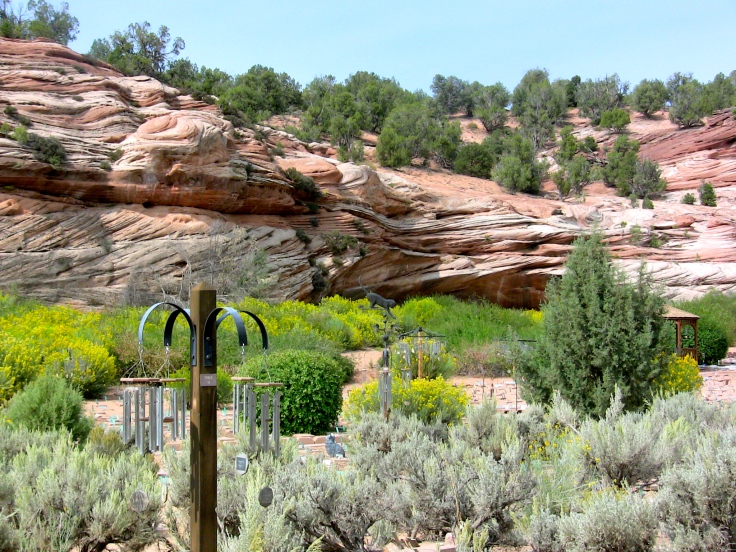 So what do you do after a week like that? Well, if you work at the Parrot Garden, you grieve. You feel rotten about it for days and try and think if there was anything, simply anything you could have done better. Done differently. Different diet. Different surroundings.

And then you come to the conclusion that you gave them the best you could. And that decades of a rotten diet, or a lousy environment could not be erased by even the best diet and the best health care. You move on and help the birds in front of you that need your attention. You get better. You learn more. Try even harder than you already are.

********** Correction on this post: The issue with Gracie was her kidneys as well as other long-term issues.  But nevertheless, prior damage was involved in her poor internal picture.*****

11 thoughts on “Negotiating the Emotional Trenches”