I sometimes end up with nothing to write about. Because if nothing really interesting happens or if my tired, woozy brain just decides to go on test pattern mode, then I am a little short on conversation. I suppose there’s quite  a bit I could discuss here, such as the fact that on my return flight from Haiti Thursday afternoon, a two year-old human took a dump on the floor in row 18, (Oh yes, she did!)  but I’m not too sure you’d find that particularly interesting.

It did have a tendency to liven up the proceedings on that flight however. It also added an interesting aroma to an already rather pungent atmosphere.  And yes, I stepped in it. Such is the life I lead and now you know why parrot poop doesn’t really bother me. I neglected to get a photo of that little situation. You’re welcome…

Oh, Su Gould sent me a shopping cart. It’s really cool and I don’t know where she got it, but it’s really neat: 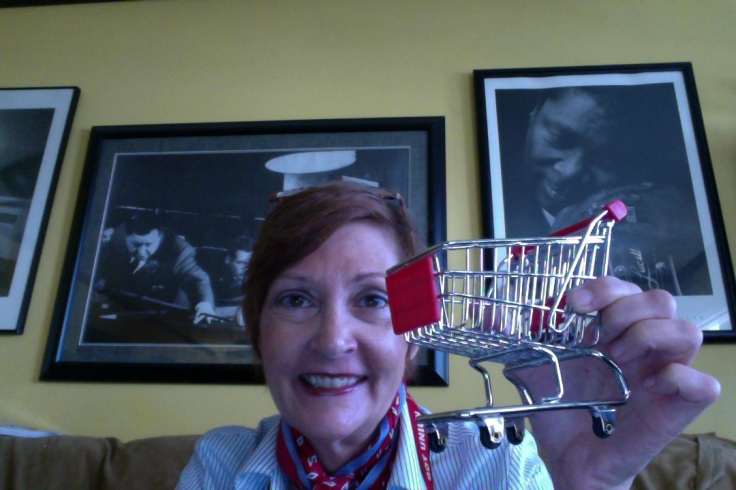 I think it will work very well in a Chop video. Or two. So thank you kindly for the gift, Su!

Bob Sacha sent me a bunch of feathers which are always welcome. He has a Hyacinth named Maggie as well as a Green Wing so you know, those are always fun to work with.

Let’s see, let’s see, let’s see… Oh yeah, in case you aren’t the media type and don’t watch TV, you might not know that my company filed bankruptcy in November. There was a little picketing down at Miami Airport and I wanted to go, but I was a little busy cleaning up poop, the human variety. I heard it was successful:

Naturally, we’re all a little down in the dumps about it, (unintended pun) and scratching our heads trying to figure out what we’re all going to do if they break up the airline. I talked to my friend Doreen about it and she and I are discussing starting a food truck business. We have all kinds of ideas on what kind of food to make and what to call the truck. She liked “Patreeni’s,” which is a combination between my name (Pat) and her nickname. (Reenie)  So we spent a good portion of the flight jazzing it up in the back shooting ideas back and forth. 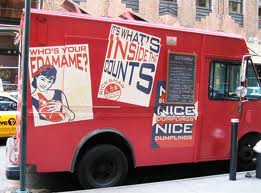 I found This photo at “The Bay Via Brooklyn”

At this point, I looked down and noticed that the pen I wear hanging on a lanyard with my ID around my neck had exploded and leaked black ink on my uniform shirt. It was a mess. I thought I could live with it until I realized that my shirt was soaked with ink and there was no cleaning it up on the plane. The more I dabbed, the worse it got. I blew it off because we were approaching Port Au Prince.

After deplaning, I went up to first class to stay out of the way of the cabin cleaners in coach. I sat down with my Mac and decided to create another “Juanita the Weasel” photo. That went well until the cleaners got to first class and kicked us all out of there. I swear there is no rest for the wicked. I stood up and realized I had just sat in a wad of gum. So I had gum on my butt and ink on my gut. I was one hot mess. This is after practically wringing the ink out of my shirt. It was everywhere and my hands were black. This is just part of the mess and this is after cleaning up most of it.

Something had to give, so I went into the lavatory and changed into my emergency layover clothes which consisted of a pair of ripstop nylon jungle pants and a black short-sleeved T-shirt from the Oasis Sanctuary. You have no idea how damned classy I looked in the aisle on the return flight. The weird part? Nobody noticed. Nice thing was, I didn’t have to change clothes when I got back home. I was already “Captain Casual.” I worked four days in a row, I have today off and I’m girding my loins for another four days of flying. No wonder I’m brain dead.