Robert is a bird person in a big way. What I mean by that is that he has big birds. Here is Bob’s bio that he wrote and sent along to me for the post:

“Robert is not exactly a newcomer to aviculture, he has been in its midst for over 30 years. Robert’s passion first took off when he saw the Dr. Dolittle’s companion, a Blue and Gold Macaw named Polynesia in the famous film starring Rex Harrison. From that point, there was no looking back. In Bob’s pre-teen years his parents bought him a cockatiel from a bird studio in the Chicago Old Town area. The store, Sedgewick Studios was owned by an older gentleman from Germany named Erlang—Erlang became a model of what Bob wanted to become. Later on, Bob saw his first Hyacinth and that species became the Macaw he wanted to have one day.

His passion took him through having budgies, cockatiels, Amazons, conures, cockatoos, and finally to his true passion—macaws. Bob currently shares his life with a Hyacinth Macaw named Miss Maggie:

and a Blue-front Amazon named Popeye:

Typical of many bird people, Bob’s birds eat a more balanced diet than he does and striving to find a perfect diet for his flock brought him to Chop.  As we all know, getting our birds to eat a variety of foods is difficult and in his opinion, it is even more difficult for those with Hyacinths. In order to maintain these magnificent psitticines we must offer a variety that is packed with healthy nutrients and fats and to ensure that it is done efficiently. Every mouthful has to count.

After reading Patricia Sund’s blog, and discussing Chop with her, he made his first batch. Bob’s Hyacinth picked through it and Chop made her more inquisitive compared to other foods. Now, she will take other foods without them being chopped, but Bob believes Chop initiated her curiosity towards other foods.

Robert is a graphic designer by profession and education, but his true passion is parrots.”

Bob lives in the Chicago area and is very devoted to his flock. So devoted in fact, that for their sake, he did this to his kitchen making Chop:

Compared to what my kitchen looks like Après Chop, this is actually quite neat. My kitchen on the other hand, looks like the inside of a dumpster after I’m done making a batch. I never could get the hang of that “clean up as you go” concept. However, I can assure you, it’s worth it. But I digress…

Bob did some research and settled on making Chop for his crew. The results were astounding as you will see. Bob made about 20 pounds which, even with his crew of jetliner birds, will last for quite a while. Bob chose a nice array of vegetables that seemed to work well together in terms of color and nutrition balance.  He also chose to add beans right in with his Chop instead of making a separate bean mix which is just fine. 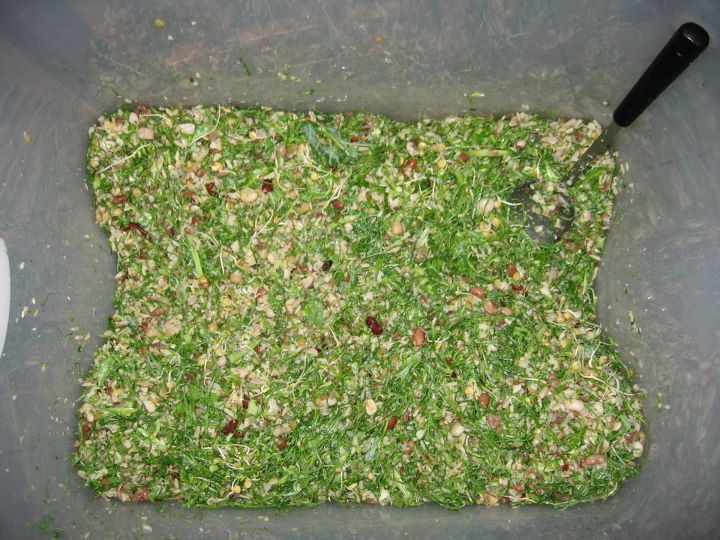 Jacqueline Johnson, the Parrot Garden Manager at Best Friends does the same thing. But you can always mix things up with an assortment of toppings to get more of a taste variety.

Bob used kale, collards and other greens, a very nutritious and important part of Chop.  He selected brown rice, quinoa, and whole grain pasta as his starches and carbs; all excellent choices.

His other vegetables included carrots, zucchini, broccoli, red and green peppers and cooked pumpkin. This batch is dead on for a nice smack of Vitamin A and calcium! 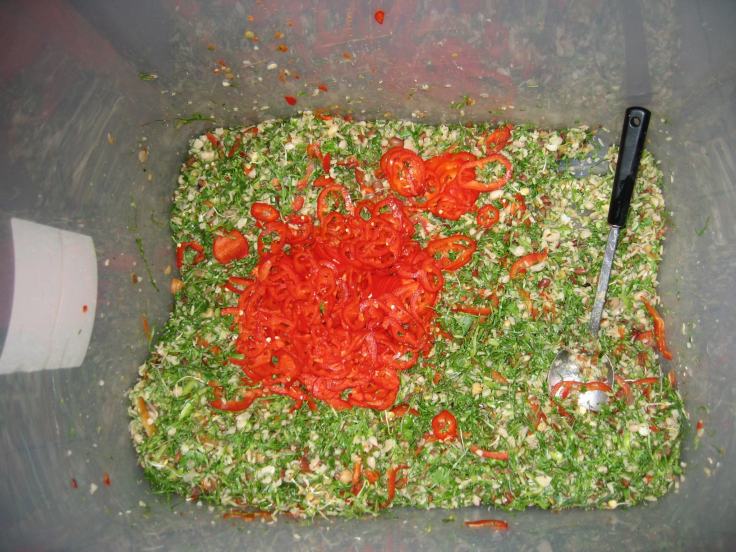 Bob also did something I used to do and is still a good alternative if you like what you see. He used 2 five pound bags of mixed frozen vegetables. He used cinnamon as a spice which works with the pumpkin addition:

Some carrots for the crowd: 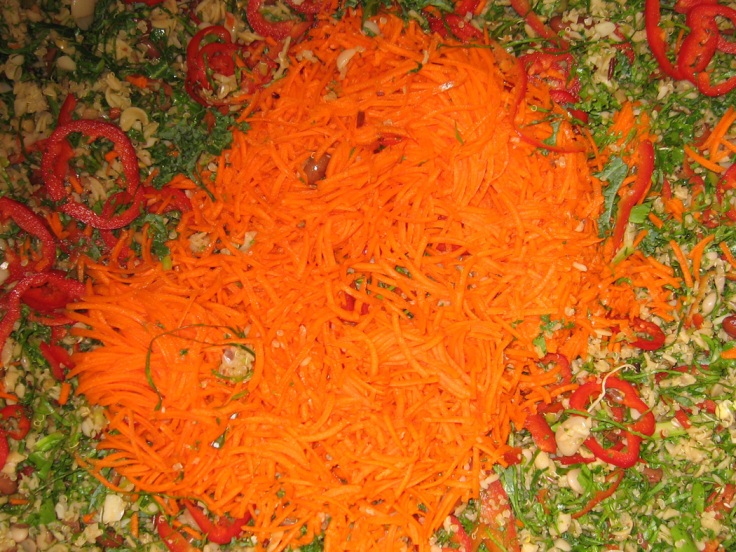 All in all, Bob did a great job with his Chop and I believe that he’s gotten the hang of making it in short order. Sometimes people have an issue with getting it dry enough to freeze fresh. If it’s too moist, it has a tendency to thaw out with a mushy texture; something you don’t want. So undercook the rice, quinoa or pastas a bit so they can readily sop up some of the moisture from the vegetables.

I’m curious to find out how long Bob’s Chop is going to last. Which reminds me, I’m getting a little low myself. So soon it’ll be time to haul out my big-ass stock pot and make another batch. Stay tuned! Many thanks to Bob for allowing me to profile his Chop making efforts.