We Want a Movie! 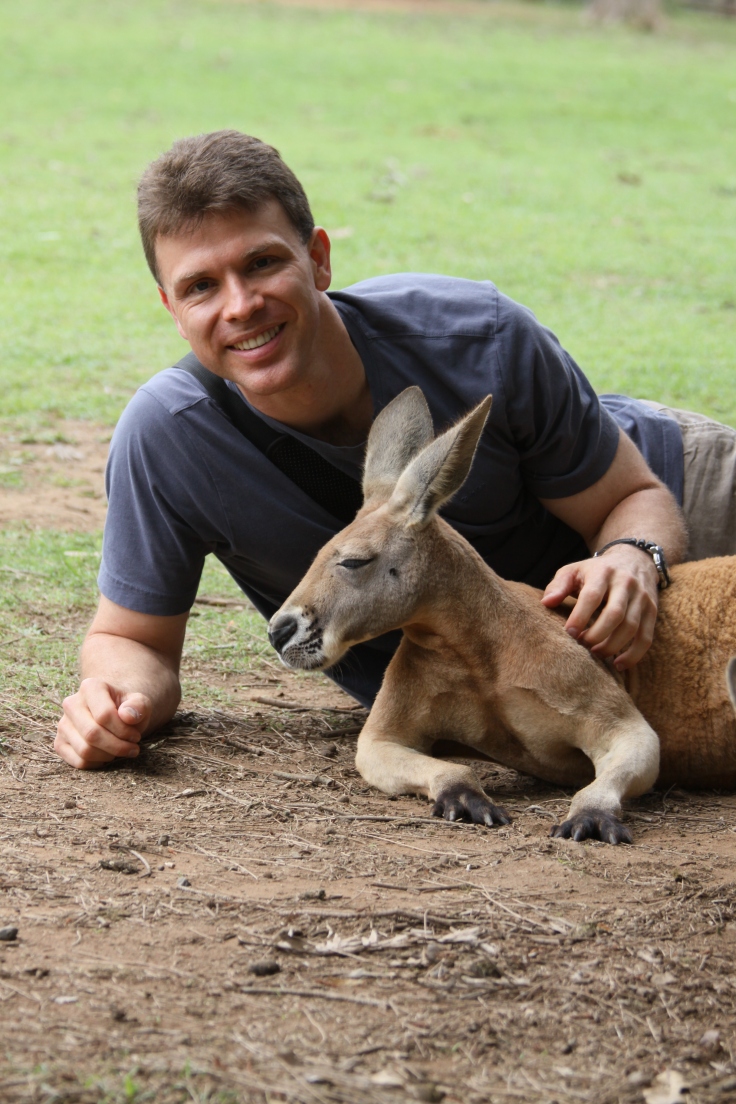 I’ve gotten to know a few people in the field of aviculture over the years. Dr. Scott Echols is one of them. He’s an avian veterinarian and his bio reads like he’s been practicing since he was about eight years old because he looks about eighteen. He lives in Austin, Texas with his wife Layle, (also a vet) and he is one busy guy. He founded a company called “Avian Studios.”  In partnership with Dr. Brian Speer, Scott is producing a series of companion parrot care videos and has also produced some other instructional videos. A standout among these is a video called “Captive Foraging” which makes you think twice about some of the stuff you routinely throw away that could be used as a parrot toy component. Scott and Brian have begun  the Expert Companion Bird Care Series now available on DVD here: Avian Studios 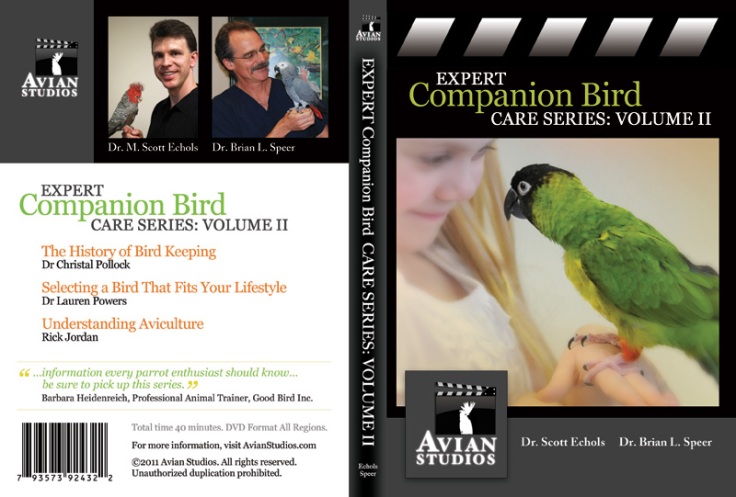 I am reviewing Volume II because that’s the first one I received. I plan on reviewing them all, but I’m starting with II.

First of all I like the idea of a DVD because, while I personally prefer books, I think a lot can be done with a DVD that you can’t do with a book; demos, visuals etc. in order to get your point across. It’s a very elastic medium and you can do all kinds of things with video that you can’t with print. I’ve even dragged myself over to the dark side of video with my feeding concept videos and work at the Cincinnati Zoo and Best Friends so I completely understand its usefulness.

Scott’s introduction brings up the fact that many comments and suggestions were utilized in the the videos still in production. I do have a suggestion about Scott’s introduction. Scott, honey? Get out of the surgery unit and into the sun more, you’re starting to look as pale as me. So much for any criticism on the Intro!

I really enjoyed the different points of view Scott has chosen to offer as he has presentations  from  Dr. Christal Pollock on “The History of Bird Keeping,” Dr. Lauren Powers on “Selecting a Bird that Fits Your Lifestyle,” and Rick Jordan on “Understanding Aviculture.”

I really like the work,  but they scared me there for a second about 10  minutes into the video as the script takes a turn from a great account of the history of aviculture and bird keeping to how “parrots can add a splash of color to your life and to your home.”

“Hoo-Boy” I thought. It obviously bothered me because anytime someone wants a parrot to add to the awesome “Jimmy Buffet-ness” of their rumpus room, I get upset. I don’t care how much of a “Parrothead” you are, I don’t believe parrots are quite yet ready to be considered “decor.”

But then all is well and the video handily redeems itself by continuing on a logical and astute path by presenting the pros and cons of different species and why some are good for one family, and not for another. The points of view are factual for the most part and it works as an educational tool.

What is also a lot of fun is the fact that I know a lot of people in the video. Scott has shots of different people with their birds and of course gives credit to all of the birds and people who appeared in the video making the credits almost as long as the presentation. But it’s just so much fun to watch, I didn’t give a damn.

I love this series on many levels. But I see a problem with it. Most people I know and respect that have parrots simply don’t need it. The people who need  to see this video are the very ones who feed an all-seed diet, have never heard of the term “foraging,” and can’t wait to upgrade from a budgie to a blue and gold macaw. But they don’t have access to to these DVDs because they’re in the big box pet stores buying seed and wood dowel perches.

So I have this really cool idea. I want bird clubs to buy the series and make it a point for all their members to see it. I’d like to see it played in veterinarian waiting areas. I’d like people to purchase the set and then share it with their neighbors who have a bird, want a bird or are thinking about getting a bird. I’d like to see it played at every bird supply store, pet shop, big-box pet store and grade school in the country.

So you see, it’s not so much about the information it contains; there is not question that Scott, Brian and the Avian Studios team knows their stuff. The trick is getting that information into the right hands; the hands of the people who need it.

Only through spreading good solid information and educating people about birds; the work, the hassle and the noise alongside their charm and their beauty, can people finally and completely understand that birds are fabulous….if you know what you’re doing. If you don’t know what you’re doing and give into the “I want one!” argument going on your head, you’re going to end up on a slow boat to hell.

For the most part, it’s a well-written, well scripted video packed with good solid information. I could quibble and pick nits here and there, but I really don’t see many educational videos lying around with this much information on how to care for birds.

The production quality is fair. It seems that the team at Avian Studios is still trying to figure out exactly how they want their productions to look. The content is wonderful and I think once they learn what their “visual identity” is and learn to better storyboard their information in a more entertaining manner this series will be a winner.

Eventually, Scott and Brian along with Avian Studios will come into their own. When they do, they are not only going to be an excellent source of quality information but an entertaining form of education. This will come with time and more experience as they produce more videos.

I highly recommend Avian Studios and their fledgling work in the avian educational video field. And if anything, get a copy to show the people who don’t quite know what they’re doing yet. There’s a lot of great information in it. By sharing that information we can better the lives of not only the newer, more novice families with birds, but the birds who join those families.