A little over a year ago I posted a video of Cookie, the little penguin from the Cincinnati Zoo on Youtube and then linked the video to this blog. And there it sat, garnering a few hits along the way, some questions about Cookie and 4 or 5 comments. It’s a cute video of Cookie running over to an outstretched hand, squealing and flapping. The hand in the video belongs to a Keeper at the Bird House. Here is a photo of me with Cookie: 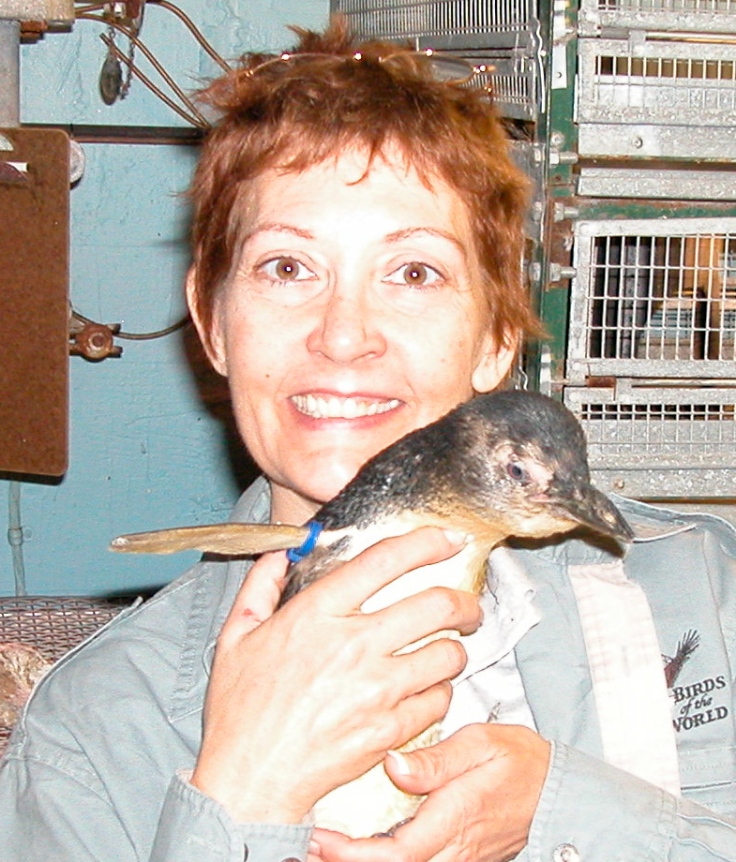 Eventually, it got to about the 2000-hit mark and it kind of sat there. Until Friday night, April 15th. I was in Chicago for the TASC Bird Expo and was whooping it up with my old friend Sandy who I’ve known since the fourth grade. Our idea of “whooping it up” was hanging around a beautiful glassed-in three-season porch with a space heater for my Florida blood, drinking some wine and talking about high school. Yee. Ha. (Well, we liked it.)

Little did I know that at that very moment, somebody with a VERY busy video site had tripped over to my Youtube channel and found Cookie. Sandy and I called it a night about 11 p.m. and I toddled off to bed. I had the presentation to do and I was kind of tired.

Up at 7 or so, I grabbed some coffee, took a shower, got dressed and checked my email.

Uh-oh. I thought I had been hacked. I had 103 emails. Not that big of a deal for me, but they were all from Youtube. They were all email notifications of comments on Cookie’s video. I checked Youtube. Yup. Cookie had what appeared to be the beginnings of a roaring case of “going viral.” He had 15,000 hits.  (In retrospect, it’s hilarious that I thought this was huge.) Here is the original post of Cookie the Little Penguin:

There were even some comments indicating their belief that Cookie was the next “Sneezing Panda”  Jeeez! I dumped the email notifications and did a little searching. But my mailbox kept filling up. I finally had to disable the Youtube comment notifications or they’d pile up so fast, I wouldn’t be able to find my own personal mail.

But I had a presentation to do so I had to get that stuff in the car. Right before we left for the Expo, I checked Youtube again. 29,000 hits. This sucker was going out there fast! At least in my humble and limited experience, this was moving right along. By the time we got to the Fairgrounds for the Expo at about 10 a.m., I was at 40,000 hits. How did this happen? Good God! Well, I was a little busy that day and with everything going on, I didn’t have a chance to check again until I was done and ready to leave. By the time I was packed and ready to go at about 3:30, Cookie had risen another 40,000 hits. And the presentation I did with my team was a huge hit.

So it was a good day but kind of stressful.

Had this happened on the following Monday, it would have been a little easier, because I had so much going on with this weekend. But it was what it was and I simply had to deal with it.

I did get a chance to email Steve at the Cincinnati Zoo Bird House to let him know what was going on. I thought maybe The Zoo people might want a heads-up that Cookie had gone viral and to expect some interest in him in the coming weeks. Steve was unfazed about it as he usually is about everything and joked that they weren’t going to tell Cookie about it for fear he’d go on the road with Charlie Sheen.

As the weekend progressed, things got a little freaky. I made it home from Chicago, tired, but glad I was able to get into the Fort Lauderdale airport rather than having to go to Miami and catch transportation back to FLL where my car was. The woman sitting next to me and I began talking and I told her about Cookie’s video. So as we landed and taxied, she was able to get on her iPhone and she checked my youtube stats: 308,000 views. Monday morning the 18th of April it was over 425,000 views. I had to fly to Haiti on Monday afternoon and just before I got on the aircraft it was approaching a half a million views. I thought, “So this is how it happens.”

A week later, after interviews, phone calls with CBS, ABC, The Baltimore Sun, communication with the Huffington Post, the website, “I Can Has Cheezburger” and a few other media outfits, things seem to be calming down a bit. At least for me. This interview was one result of all of the attention Cookie got:

As of Easter Sunday 2011, Cookie’s video is climbing into the 2 and a half million mark and still shows no sign of coming to a screeching halt anytime soon.

But Cookie and the Cincinnati Zoo are on the map and I’m so very happy for them.

Cincinnati Zoo, essays and articles, Most Popular Posts and Articles

8 thoughts on “Going Viral With Cookie, the Little Penguin”