Down the Rabbit Hole at the AFA Conference 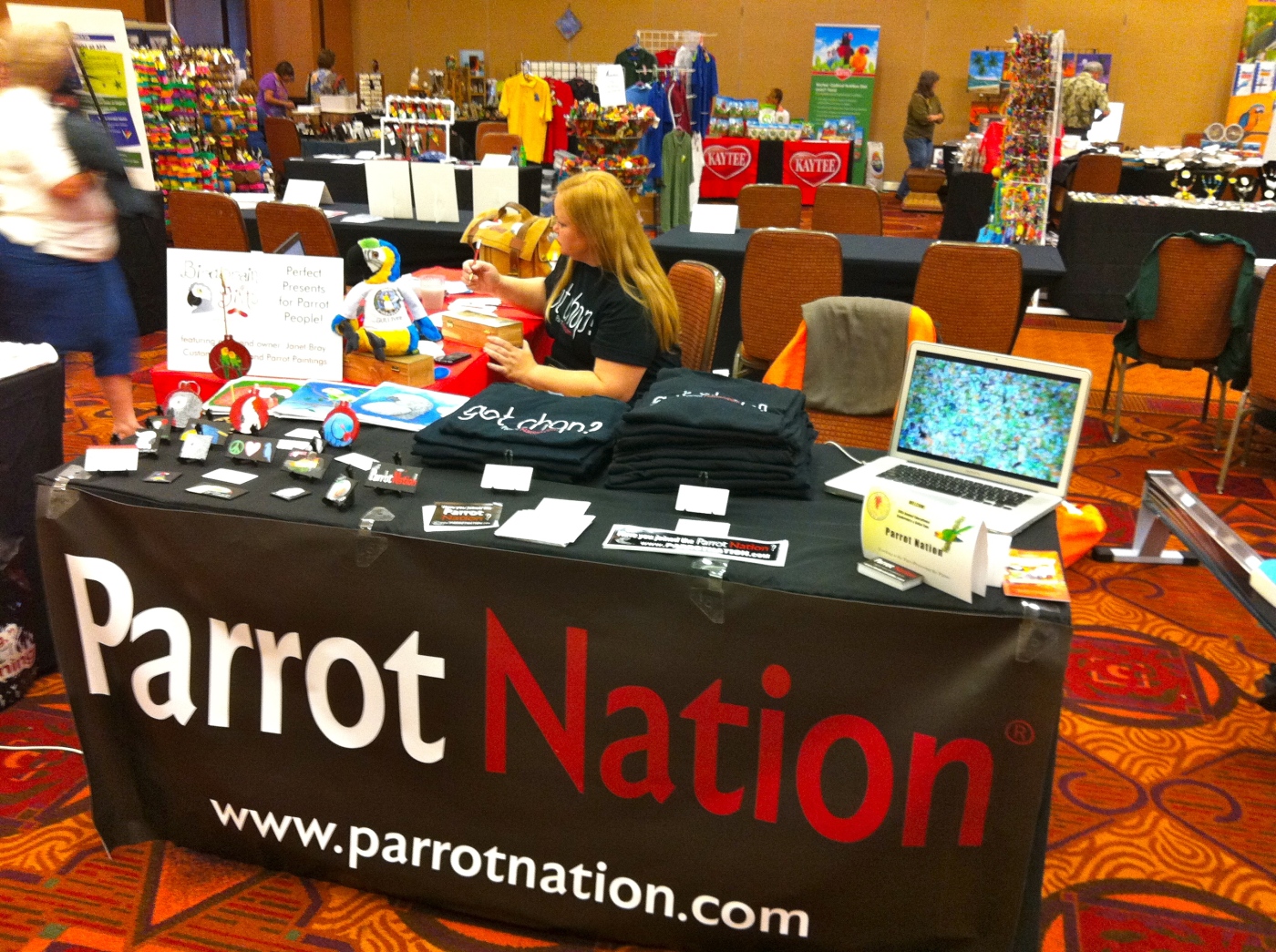 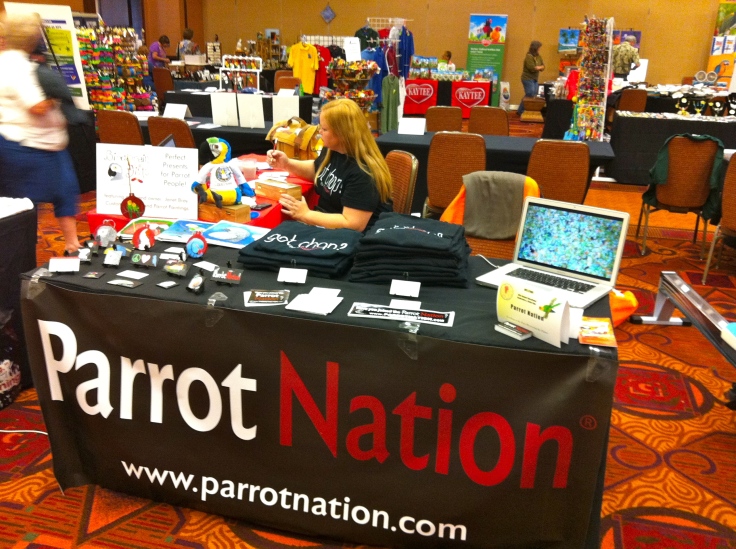 I returned from the AFA Conference in Raleigh-Durham last week and I haven’t posted about it yet because I had to hit the ground running. And my brain hurts. My thoughts on the conference will take several installments because there is so much involved. I won’t be talking much about the speakers and their agendas, but if you want to see the “Who’s Who” and who spoke about what, you can always go to their website and in a few months you can purchase a DVD of their presentation.

What I am choosing to write about instead is more about the AFA itself; who they are, what they do and the issues they deal with.

I am a member of the American Federation of Aviculture. And there are several reasons. But one of the main reasons is that I would like to see the AFA get more involved in adoption and rescue. While individual members do a lot of it, I don’t see it being promoted much on their website and the inclusion of that is something I was interested in seeing. I’ve had discussions with people about this and I will be posting more about this very issue in more posts about the AFA.
There are some inherent issues that make common ground for the AFA and adoption organizations a rather sticky wicket. It’s the issue of “6 Degrees of Separation.” Many adoption organizations tend to be a tad opinionated about breeding. And that is an issue because the AFA was founded 39 years ago as a reaction to an event in California in March of 1974.

The AFA was begun by Avicuturists. That’s who founded it:

The American Federation of Aviculture (AFA) is a nonprofit national organization established in 1974, whose purpose is to represent all aspects of aviculture and to educate the public about keeping and breeding birds in captivity.

AFA defines anyone keeping exotic birds in captivity as an “aviculturist” but AFA advocates that this designation carries with it certain responsibilities transcending those of the owners of domesticated pets like dogs and cats.

The AFA is trying to represent all of Aviculture. And that’s an ambitious undertaking because there are so many facets of it that it’s difficult to encompass all of them. They do a wonderful job for the most part considering what they are up against.

Just as in the world of food, you have omnivores, vegans, pescatarians, vegetarians, lacto-ovo vegetarians, raw foodists, people who only eat sustainable and organic, people who eat only gluten-free food; well, you see what I mean. You’re never going to get the militant vegans on the same page as Anthony Bourdain. It’s just never going to happen. It has now gotten to the point where deciding what to have for dinner has become a political issue.

It’s the same at the AFA. You have conservationists, pet breeders, retailers, wholesalers, equipment manufacturers, researchers, people who breed for conservation and people active in enacting or changing legislation. Thats just for starters.

It’s kind of an issue getting everyone pulling in the same direction when there are so many special interests involved. But they try. They want to represent all of the factions in the world of Aviculture.

This is always going to be the mountain that the AFA is going to have to climb every day and I admire their efforts.

The AFA has taught me so much. But what I have learned more than anything is how much I simply didn’t know or didn’t understand. They have opened my eyes to so many issues I go home with my head spinning and many times in a state of confusion. 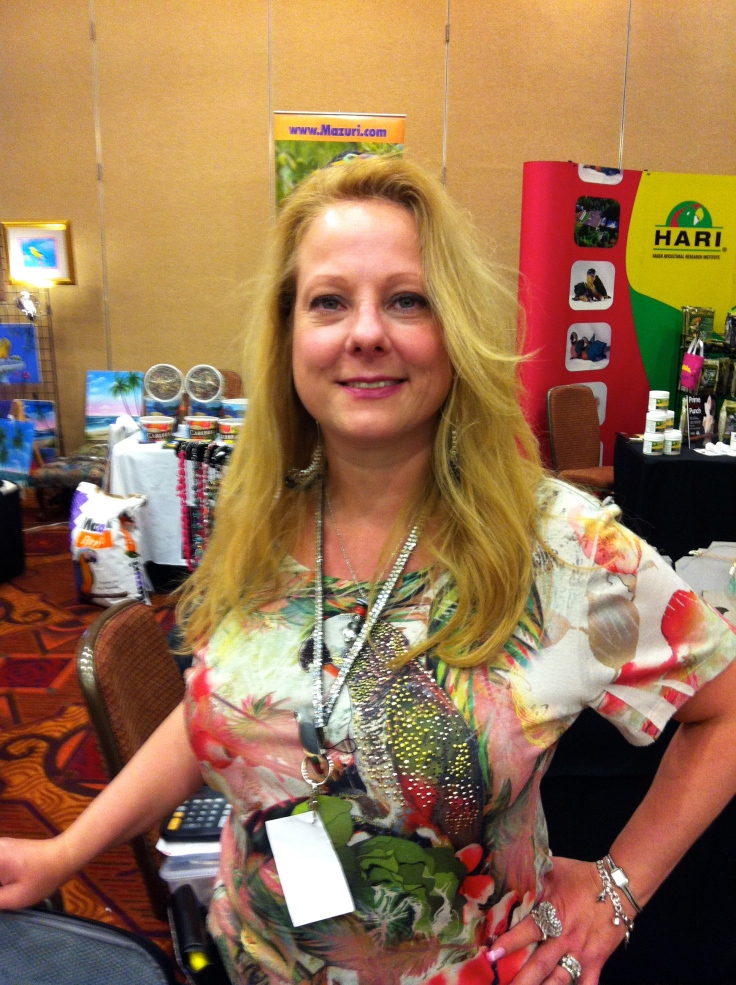 Lisa Bono of the Platinum Parrot

What I have stated is just an opener to the problems the AFA faces every day. What I  didn’t know before this past week is about the animal rights groups trying to make things difficult for everyone who has a companion animal, is not a vegan and wears shoes made of leather. And they will use every sneaky and dishonest tactic to do it. They aren’t simply honest and say, “We disapprove of anyone using an animal for anything.” Nope. The use diversionary tactics and employ out-of-date video to convince people that things that went on decades ago are currently occurring. This would would be akin to showing photos of the slaves in the south before the civil war and claiming that it is currently happening in this country.

The legislative issues the AFA faces with laws being passed without regard to the individual’s right to have a companion animal stymied me. “What? Are you kidding?” This led me down the proverbial rabbit hole as the AFA tends to do.

Flip the coin and you have the adoption organizations who feel that they are being put in the position of cleaning up a mess breeders have left in their wake. I don’t know enough of the situation to understand it completely, but I keep trying.

I have heard talk that more and more breeders are getting out of the business and due to that, bird babies are becoming a scarcity. In turn, the adoption organizations feel that this is just fine.

I also heard that dogs are being imported into this country from other parts of the world. I don’t understand why, as there is a huge cost involved in importing anything. It was explained to me that the majority of the dogs in the  local shelters are the big, black dogs nobody wants and they are bringing in the cute little fluffy dogs to place in homes. Is this true? I don’t know if this is true because I’ve never read it on the Internet. And as we all know, if you read it on the Internet….but then, I’ve never dated a French model.

But kidding aside, I had never heard of this practice before aside from bringing dogs that had become pets to soldiers in Iraq back to be with those soldiers who had “adopted” them. But my source was excellent and I have to believe it.

This is just the tip of the iceberg the AFA is facing.

The AFA Conference is a fun and yet draining experience for me because it forces me to think about uncomfortable things.

There is an issue with some legislation passing that requires a vet check on a budgerigar within two weeks of the sale date. This is a problem for the retailer because if the budgie doesn’t get sold within two weeks, they have to be health-checked again to keep the budgie a “sellable” bird. And that costs money. Multiply that by every bird the retailer has and you are talking about a lot of money. 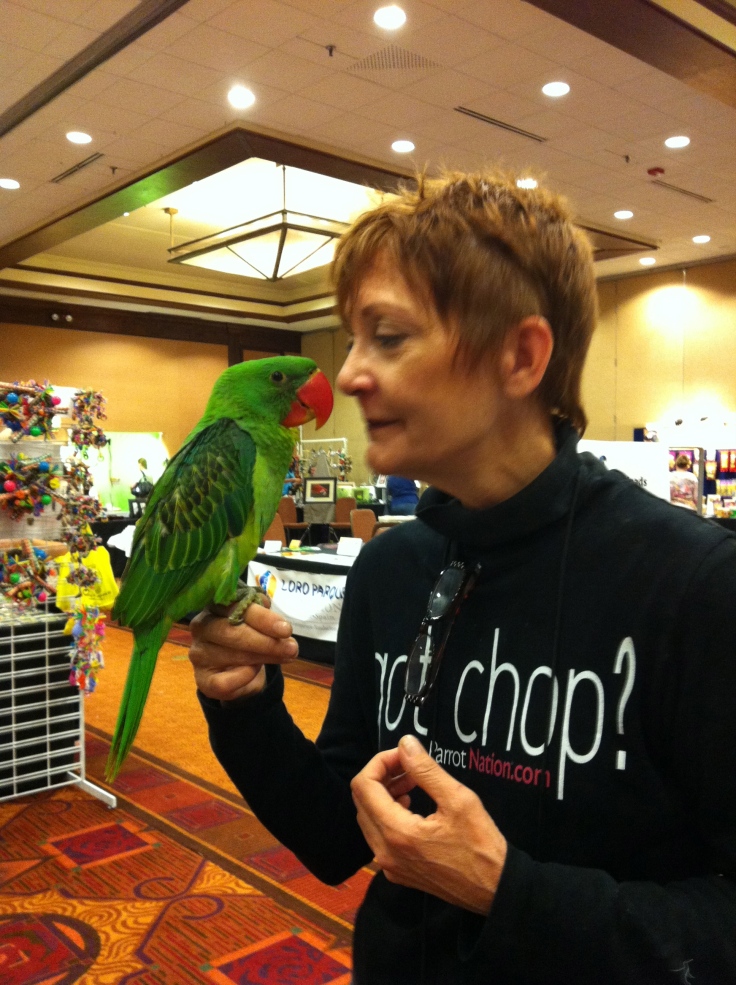 Well, why is this a problem? Why can’t they just wait until someone wants the budgie and then they can make the appointment for the vet check? Well, I suppose it’s because it would decrease impulse sales. A person simply can’t go into a store, select a budgie, buy a cage, some pellets and a book on their care and take it home.

Okay, so where’s the problem with that? If the customer is refused the immediate purchase, they may not come back after the impulse has waned. And there goes the sale of the budgie, the cage, the food, the book and future purchases of food, toys and other needs.

Okay, so why is this a problem? Well, because the retailer has a business, a home, a car and a family to take care of. That’s the problem. So, do they allow the bill to pass and require that budgie to be health-checked by a vet, possibly interfering with the sale and potentially putting yet another family out of business, into foreclosure and on the unemployment line resulting in more weight for the government to bear? Or do they just let the budgie get sold which keeps the family in their home, keeps their business going and the family fed? Don’t ask me, I have no idea.

This is a simple way of explaining one of the issues currently being faced by the AFA. And I sure as hell don’t have the answers.

After that, I’m back down the damned rabbit hole. And it’s times like this when I feel I chose the wrong colored pill.

The AFA forces me to think about things I don’t want to think about. They open my eyes to issues I didn’t even know existed. I don’t like thinking about some of them or even knowing about them at times. But it makes me a more educated person. And it certainly makes me more cognizant of the bigger picture in Aviculture. It isn’t just the Breeders vs Adoption Organizations. There’s a lot more involved and it isn’t that simple. It’s a Gordian Knot of issues and many of them overlap.

If you come to the next AFA Conference in Portland, Oregon, be prepared to get your boots shaken a bit. It is a learning and growing experience you won’t forget.

71 thoughts on “Down the Rabbit Hole at the AFA Conference”