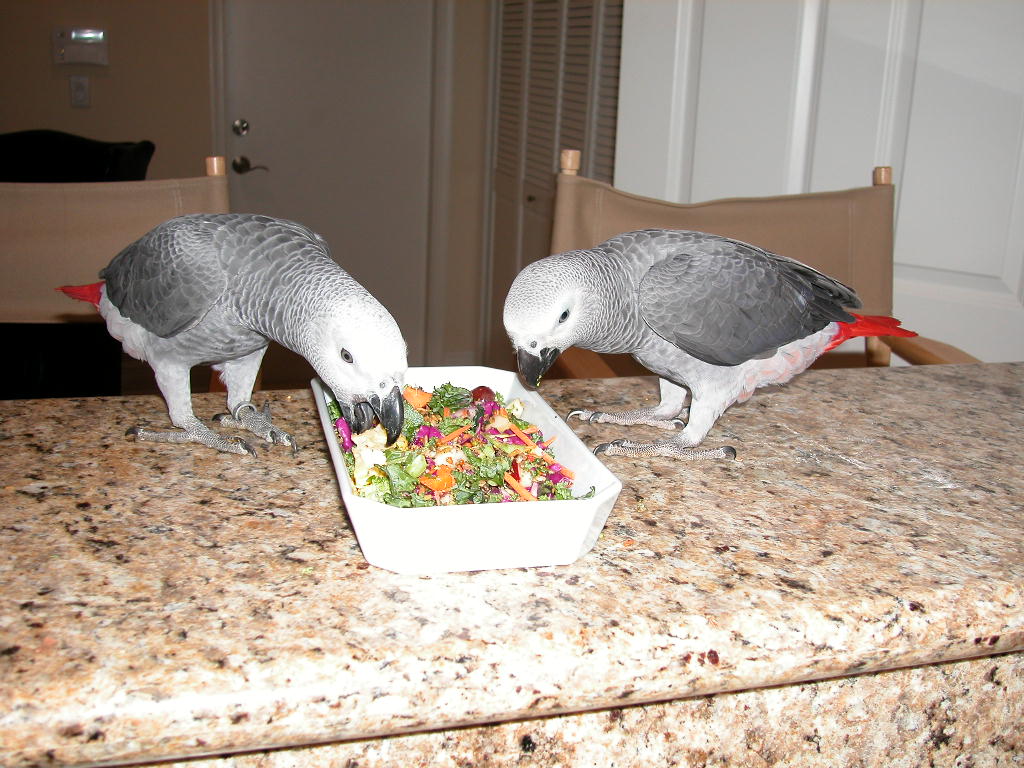 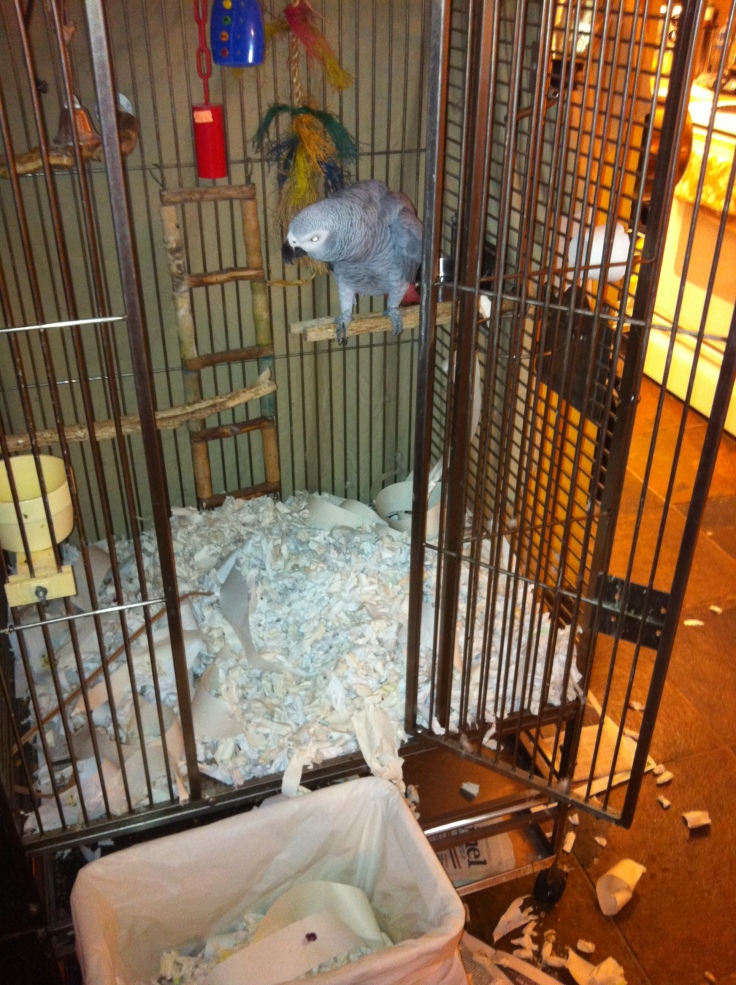 Let’s get a closer look at this: 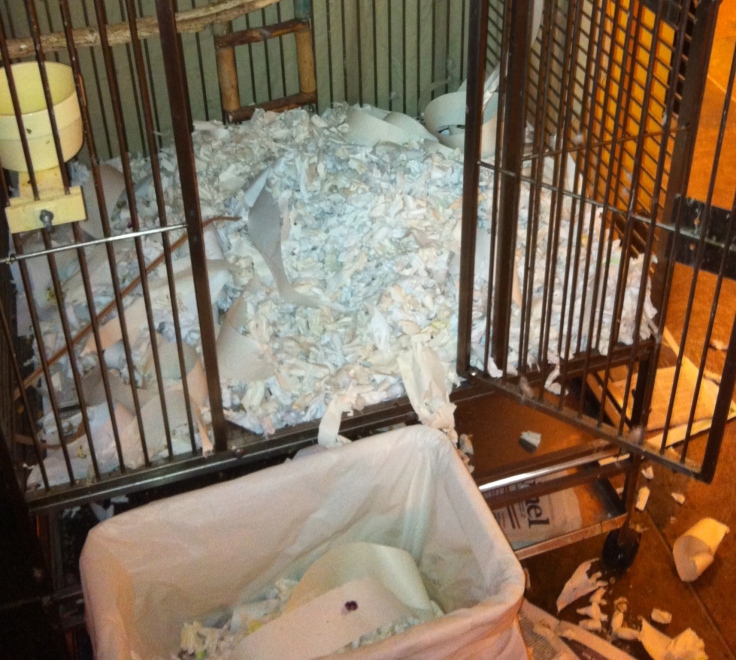 I’ll explain the “Paper Snowdrift” photo above, but here is the background story on Byron, the artist who created this:

Byron is my newest foster. It’s a long story that spans a decade. but this isn’t his first time here. Byron is a happy healthy African Grey and seems to be quite happy ensconced in the flock of Greys here. I first fostered him when he was very young in about 2004.

This is Byron on the left and Parker on the right in September of 2003. Parker’s hatch day was March 2nd of that year and Byron is a couple months younger than that. Their eyes are just beginning to turn in this photo so you can see they were both very young. 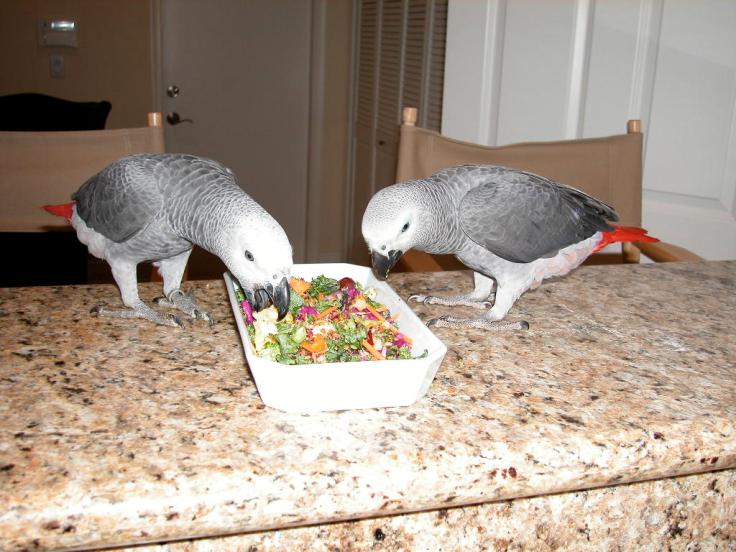 Through an odd series of circumstances, I ended up fostering Byron for a few months and due to some misunderstandings and other negative circumstances, Byron’s human Dad and I stopped communication for a long time until just recently when I received an email from him asking me to find Byron a new home. 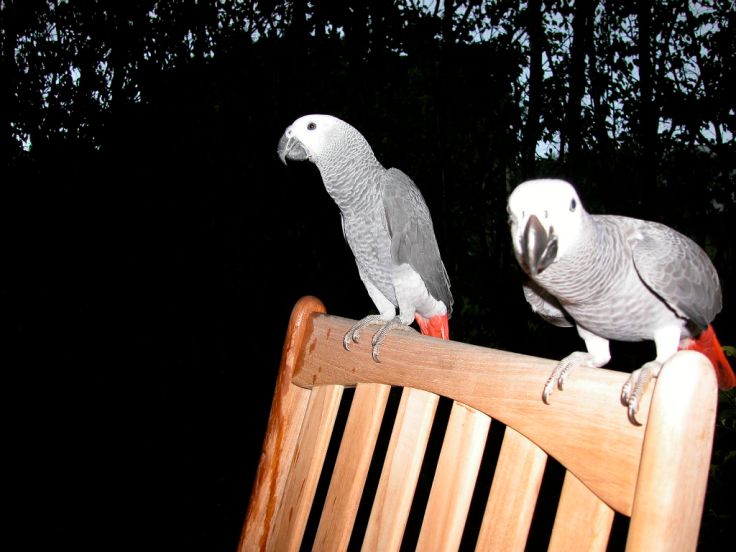 This disturbed me. I felt bad for Byron. I knew this little Grey and it made me sad that after ten years, his family would want to give him up. I know it bothered his family as well, but I just really believe that you don’t get a bird on a whim and after ten years you decide to part ways with him. However, his family is moving to Australia and they doubted he would survive the quarentine legally required for admission to Australia. Regretfully, they contacted me and asked me for help. Of course I said, yes. So now Byron is here for a while to adjust being away from his family and to give me time to find him a good foster home. 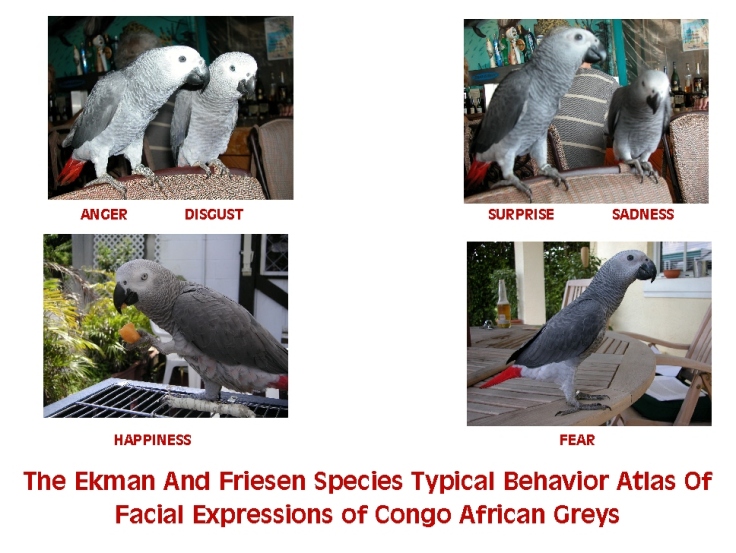 Parker and Byron in a “Photo-Toon” I whipped up back in about 2004.

Byron is a delightful Grey. He is short on a few skills, but paper shredding isn’t one of them as you might have noticed. His Human Mom told me that when they left Byron occasionally with a friend for a week-long trip, they would come home and his tail would be gone. Byron had no tail when he came to me the first time I fostered him in about 2004. But during the 3 or 4 months he was with Parker and me over 9 years ago, his tail grew back. I was also told by someone familiar with the situation that when he went back to his orginal home, he began pulling out his tail again.

It’s been 3 weeks since Byron came and his tail is still intact. I think the issue was that Byron didn’t like being a solitary bird with no company for long stretches at a time, but  he is well suited to a flock situation. With my 3 Greys, he has company all day long and has no reason to pull out his tail. It’s just a guess because I haven’t asked him, but that’s what I am surmising. 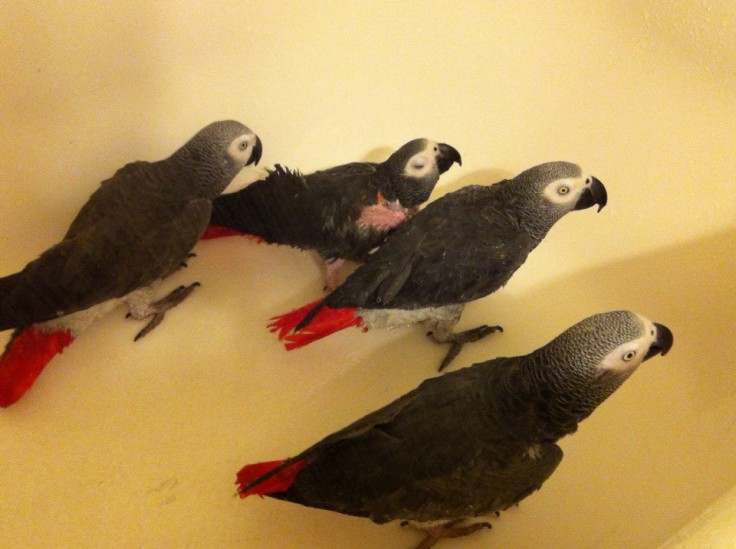 Byron showering with his newfound Flock.

The headline photo is 2 days of shredding adding machine tape rolls. I was in South Dakota speaking at a Parrot Festival over the weekend and Bill was home taking care of the parrots. All the cages were clean when I left. Bill began noticing that Byron was enthusiastically going after the adding machine tape mounted on top of his house and became fascinated with the buildup at the bottom of his cage. He saw it grow and simply couldn’t believe it. Other than cleaning any grungy paper on the top, he left it alone for 48 hours to see how much would build up. This in no way harmed Byron as he never plays on the bottom of the cage anyway.

This explains the shot at the top of the post. Again, this is not a dirty cage. All scattered food and droppings that landed on paper at the bottom were cleaned out leaving nothing but clean, shredded paper. In the interest of illustrating how messy parrots can be, I posted this. Please notice that the top shot has nothing but clean paper in it.

When I left to fly a turnaround yesterday morning the cage was clean. Here is the cage this morning after less than 20 hours. There would be more, but he ran out of adding machine tape for a while before Bill refilled his dispenser: 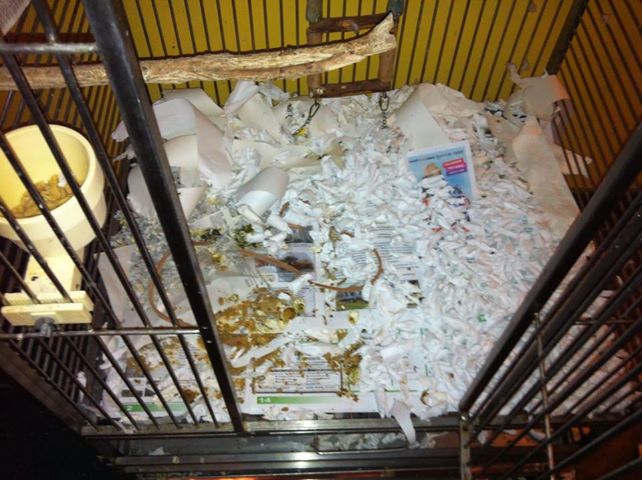 Here is Byron’s cage this morning cleaned up after the mess above: 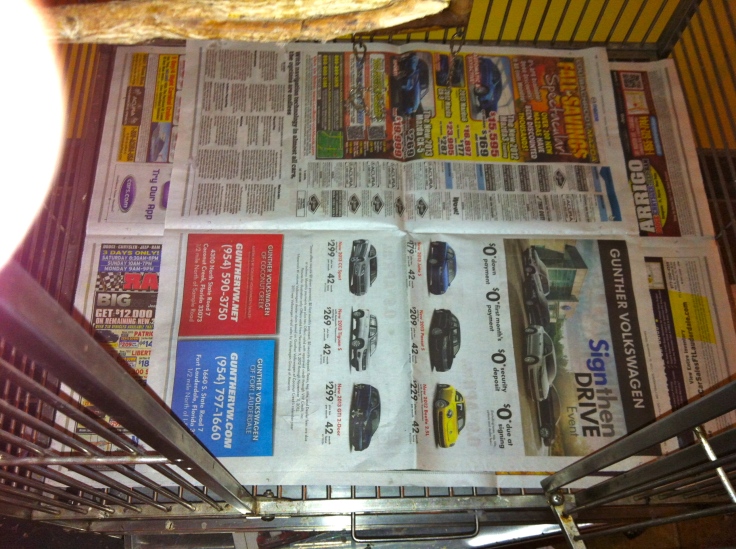 And here is his cage bottom after less than one hour: 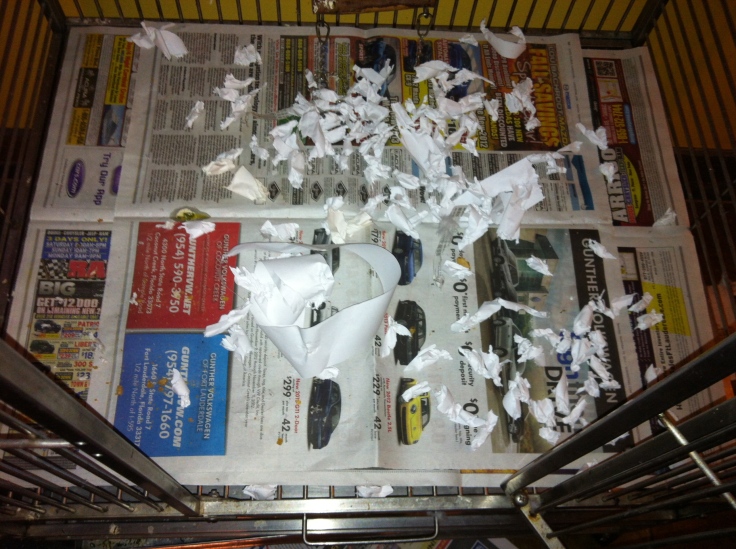 So you can see how 2 days of shredding would amount to the buildup in the top shot if not scooped out. While I myself would not let it go that long without cleaning it up, it does make for a pretty strong statement on what pigs parrots can be. This next shot is after 1 hour and 45 minutes: 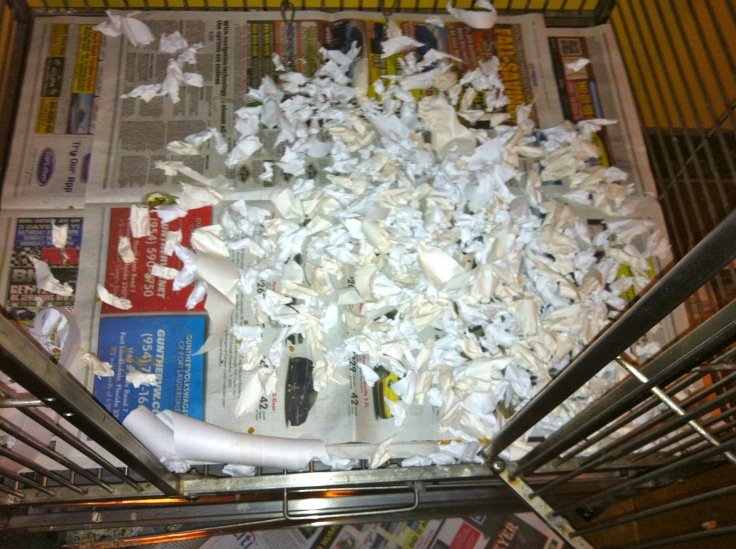 But I wasn’t here and it was actually stunning to come home and see what he did in the short time I was gone. Again, this is not really a “dirty” cage. Bill cleaned out the “grunge” and his water and food bowls were tidy and sparkling. This shot was taken this morning after two hours from cleaning the cage and changing the paper from yesterday. That would be about 15 minutes after the previous shot above: 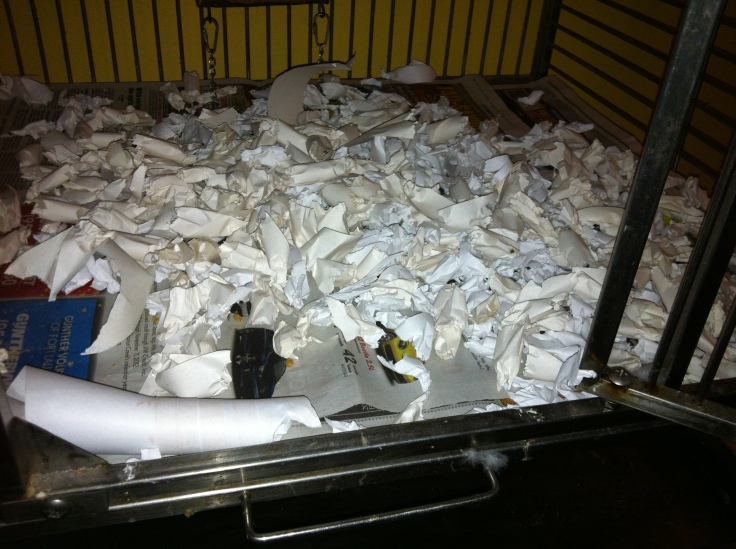 This is nothing but shredded paper. But in the interest of illustrating what slobs parrots can be, I thought it would be a good shot to show people who express interest in getting a parrot if they don’t know what they are getting into. Please share the top shot with people who think parrots are “Cute” and “Wouldn’t it be cool to have one.” All I know is that Byron is shredding paper and not his tail. And if that’s what it takes to keep him from ripping out his tail, I’ll choose the adding machine tape mess any time.