We have a Guest Blogger today. Her name is Katrina Webster and she is one of the Bleaders, (blog readers) here at PN. She sent me a wonderful email telling me this charming story about a little run-in she had with a Jamaican hot pepper. Here is Katrina explaining why it’s sometimes not a good idea to follow your instinct! Great job, Katrina!

I have been buying peppers for Julian (my green-cheeked conure) lately, now that I know I can.

Well, I got him Jamaican hot peppers, (even though they say they are from the Dominican Republic; close enough?) They even have a warning on the back of the package. I put them on treat clips in a few places on his cage, and he seemed to really like the reddish-orange ones. I leaned in to sweet-talk him on Wednesday evening. He leaned over and kissed me unexpectedly on the corner of my mouth from his perch, which I thought was especially sweet.

Photo of Julian by Katrina Webster

Then he stepped up without needing a seed! While I’m holding him on my left hand, I suddenly feel an almost-painful bloom of heat in the corner of my mouth.

Instinctively, I licked it. BIG MISTAKE.

I am a mom, and after almost ten years of “Momness,” I can keep a cool head when things get dicey, even though on the inside I am freaking out.. so I think ok, ok what can I do?

I feel llike a cartoon character…eyes filling up from the bottom to turn red, steam coming out of the ears, flames coming out of the mouth, the works. It’s funny, the visuals that pop into your head! I grab water and milk, because I know milk is good for neutralizing acids at least. But it had little to no effect.

I called my Buffalo, New York native neighbor who in her 65 years has lived 2 lifetimes worth of crazy stuff. I ask her advice while trying not to spontaneously combust..I put Julian on his tree and he watches the whole scene with great confusion, and a little amusement.

She says she will look it up “real quick” and call me back. She calls back 5 minutes later. By now I have blisters on the left side of my mouth..
“Well, I called the hospital.”

THE HOSPITAL?  The nurses must have cracked up on this one!

“They said to call the doctor. It is 6:30 and I don’t know of any doctors who work THAT late, so they said to try some ice.”
She continued, “So then I called Poison Control Center….”

POISON CONTROL? You know, the ones who make the Mr. Yuk stickers and I am officially mortified. I couldn’t help but laugh. I had called her asking advice about how to cut the spice on a pepper and it was as if she called in a SWAT team.

“So, after the guy tries not to die laughing and swallow his tongue in the process, I asked him for the antidote for hot peppers…”

“And try some yogurt.”

“Or have some ice cream.”

“Just anything with with a high milk fat content.”

I reply, “So, you mean I have to eat ice cream on purpose?”

“Yes !”  She chuckled because she loves ice cream too. “Do you have any on hand?”

I tell her I do, and thank her profusely for her help. I then imagine that the poison control guy hung up and said to a nearby co-worker, “You are not going to believe the call I just got..” and all of them laughing at my expense.

I get out the yogurt and just lay it on thick in my mouth. I now look rabid. It helps a little but now I know why the warning is there. I knew why, but holy cheese, this is really bad. I have blisters and swelling, and now gobs of yogurt. I was glad my husband was not here to see this. I sigh, put Julian back; glad the kids are playing outside so they aren’t seeing this either laughing at their crazy mother.

Twenty minutes later, the doorbell rings. It is my neighbor with a bag from Baskin Robbins. It has two scoops of “Cookies and cream” in it.

“It has a high milk fat content on account of the cream” she explains. I just look at her, I had licked off the rabies yogurt when the bell rang. I really didn’t need to answer the door that way doI have my pride. Well, kind of…

I gratefully accepted the bag, feeling a little silly. Ok a LOT silly; it was kind of a funny thing, and it turned into this event and it was funny as hell. All this from a kiss: a hot kiss from a cute guy who isn’t my husband.

I hug my neighbor and gratefully accept the bag.  She smiles and walks home. I gleefully lick my ice cream. It really feels good and I must have been a sight with half my mouth puffy. It still smoldered but it was not on fire anymore and the ice cream finally put the last of it out. 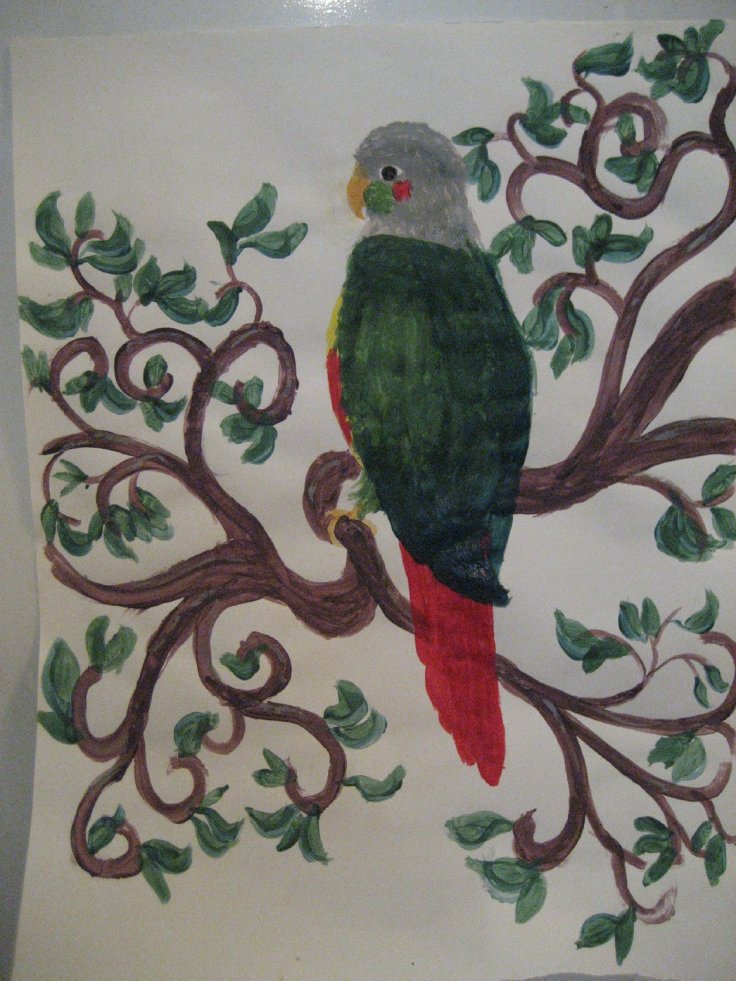 I made a card for her, drawing myself as a cartoonish woman with fire coming out of her mouth and steam coming from her ears. On the inside I drew her in a firefighter coat and hat, holding a hose hooked up to an ice cream truck painted red and “Baskin Robbins Fire Dept. ” printed in the side. There is a cartoon woman, too, but this time she has ice cream on her head and shoulders, a relieved smile on her face and steam rising from her head. A drop of ice cream dribbles out of the hose and her waiting beagle waits beneath it to catch it. She loved the card.

Today, there is no sign of anything, but I am being a lot more careful about kisses! Julian is now allowed to kiss my forehead or cheek but I never let him kiss me near my mouth any more. It’s just common sense.

I just had to share this true “You know you are a bird person when…” story.

Don’t laugh at me too hard.